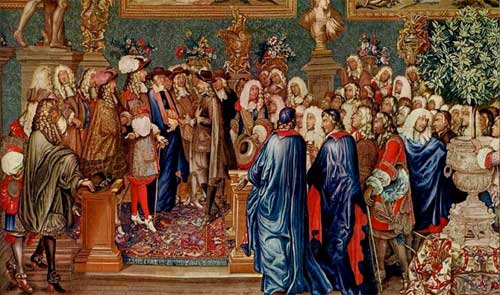 The act of selling, specifically the transfer of ownership of feudal titles to property to a person for a price within a proper legal procedure will soon be a relic of the past.

Our Feudist lawyers, specialists in feudal law are of the opinion that the sale of feudal titles in France, Germany and Italy is near his end due to a problem of availability. Titles with the quality and state of being feudal and feudal holdings and domains such as Baronies, Lordships, Overlordships, dependent lordships, titles held by feudal tenure or any other dignity suggestive of feudalism are so limited nowadays that are becoming a rarity for collectors. Feudalist and Feudalistic sales of titles will also be limited due to the scarcity of dignities able to be researched.

Feudal Titles originate due to the concept of Feudalism. Feudalism was actually a sociological and legal epoch originated in France. Therefore, the oldest Feudal Titles of Europe were always situated in France. It would not be unwise to affirm that the oldest titles with a Feudal Character are French. Normally, the best quality feudal titles on sale come from France. Also, Feudalism in Italy is very old and deeply rooted in society and history. Italian Feudal Titles are some of the best of Europe.

Our firm has a deep historical knowledge of the phenomenon called feudalism in France, Germany and Italy. Therefore, we do have the capacity to research possibly the best feudal titles available in Europe.

Unfortunately, nowadays, there is a big problem regarding availability of feudal titles for sale, and the big question that nobody seems capable of answering is how many feudal titles are still available for disposition in France and Italy? The truth is that obtainability of titles is very scarce, and it will come to an end in a few years.

Data are conclusive and sad, and it is estimated that probably not more than a hundred titles of nobility of feudal origin can be researched and obtained both in Italy and France. This means very sadly that probably in a decade, the possibility of buying and selling French and Italian Feudal Titles will simply not exist.

If you do have a vested interest in history, nobility and feudalism, it would be a good moment to think about your options and perhaps undertake historical research in order to study the possibility of acquiring your own feudal title. Also, another problem is that the most likely consequence will be the rise of prices for research and acquisition of feudal titles in France, Italy and Germany.

While this is not expected right now, in the next five years titles feudal titles will increase in price, and in ten years there will be none left or the few remaining will fetch mighty prices. A very curious phenomenon is that many titles are being accumulated by certain German People, due to the voracity of a few collectors in Bavaria and Prussia, with good knowledge about the worthiness of the feudal titles from the north of France and also from the south of Italy.

As said before, if you have ever thought about owning a feudal title, this would be an excellent moment to consider acquisition, as at the present moment there is still titles available, and prices are not staggering. You are welcome to contact our firm and enquire.