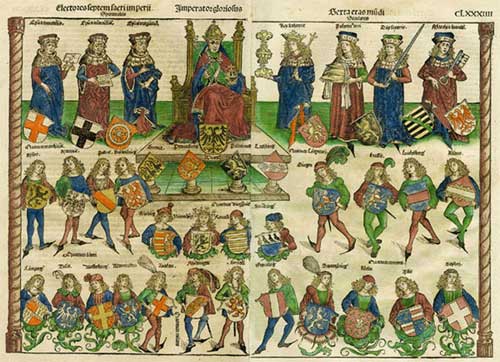 Our company owns archival software and databases listing practically the totality of all the Barony Titles existent in France, Italy and the Germanic Lands of Europe. This gives us a privileged position to research and find extremely valuable Barony Titles.

Our process of legal research of Barony Titles is fast and efficient and in a time-frame of 48-72 hours we can have ready a report, dossier and appraisal on an ancient Baronial dignity, containing a charter with all the relevant legal and historical data for the title. Then, our clients can make an informed decision regarding the purchase of the Barony.

If you want to use our unique and exclusive Barony title search service, contact us as soon as possible. Our company has impressive resources of genealogical, historical and legal research. In fact, we have data with the complete lists of holders of titles of Baron in France before the French Revolution, and incredible opportunities on Barony Titles linked to German principalities and territories that belonged to the Holy Roman Empire.

Can you help me locate a Scottish, English or Irish Barony Title for Sale?

No, we cannot help you and please do not ask us. Our expertise is considerable, but only for French, Italian and German Baronies. As stated many times, we are completely uninterested in any type of British Title.

In order to buy a Baron Title and become a Baron, cautious investigation needs to be done. The noble title of Baron occupies one of the highlights of the traditional aristocratic hierarchy in France, Italy and Germany. Furthermore, a specific feature of the noble title of Baron is its absolute feudal origin. The noble title of Baron was introduced in France by the influence of the Carolingian dynasty that ruled the Holy Roman Empire from the coronation of Charlemagne on December 25, 800. Then, this type of title spread to other countries and areas of Europe.

Etymologically, Baron comes from the Germanic word Baro, meaning warrior. Among the Germanic peoples, only a free man, i.e. not a slave, could hold the warrior status while bearing arms. This was a privilege gained by birth, and therefore transmissible. This term, over the centuries, converted into the Latin Baro, Baronis.

Barons are entitled to wear a signet ring, engraved with their Baronial Arms, a discreet sign of recognition, normally a shield surmounted by the corresponding crown. Others have their Baronial Arms carved in wood, coloured or plain.

To acquire a hereditary and historical Baronial Title is a dream coveted by a minority. Baron Titles are the oldest nobility rank in history, many of these titles have an enormous historical value, royal connections, genealogical importance, and also geographical links to some of the most beautiful areas of countries like Italy, France and Germany. We are proud to say that our company researches the best titles of Baron in continental Europe.

Another way of accessing a noble title of Baron was by an imperial grant dispensed to an Empire’s Knight. Often Barony Titles were also conveyed by sale, donation or other means, and you could buy easily baronies by private law procedures.

We are able to research for our clients five types of Barony Titles:

1. French Barony Titles:
We are experts in finding very old and hereditary Feudal Baronies from France. These are some of the most ancient and prestigious titles of the world. In France, Baronies were sold, and a shining example of this is the sale of the Barony of Aubonne in 1670 to Jean Baptiste Tavernier, or the famous purchase of the Lordship of Montpellier, bought in 1349 by Philippe III of Valois to James II of Mallorca. French Feudal Baronies sell well for 7000€.

2. French-Germanic Baronies:
We can also research the coveted French-German Baronies from Alsace and Lorraine. These Baronies have German names, and are usually very old. In order to obtain the possession of one of these antiques is needed a very considerable amount of careful advice. Not everybody can do so. Alsace is a very curious geographical area, bordering with Germany and the river Rhine area, famous for its old forests, monasteries, castles and strongholds, and also for excellent wines and impressive feudal titles. The price for this type of Barony is of 12000€. Lorraine is a very exciting region, neighbouring with Germany and Switzerland, and the river Rhine area, famous for its old Nordic Forests, Decadent Abbeys, Ruinous Castles and Feudal Towers, and also for superb wines and some of the most imposing noble titles of Europe.

3. Italian Baronial Dignities
Straight from the Kingdoms of Italy, we are able to locate and find for you a very impressive Feudal and Noble Barony Title from old Feudal Italy. Our Hereditary Baronies come with coats of arms that maybe adjusted by the new owner if he so wishes, and are one of the most desired things in Europe. So, if you are interested in history and wish to become the proud owner of an historical title of nobility with very interesting feudal reminiscences, this is the place and moment.

4. German Baronies:
In some cases, and upon due diligence, we have been able to find ancient German baronial titles, with enormous intrinsic value and incredibly old charters of creation.

5. Holy Roman Empire Baronies
Our company has an agreement with an important organisation dedicated to the study of feudalism in the Germanic speaking lands of Europe. As a consequence, we quickly know when a Barony Title from territories that belonged to the Holy Roman Empire at some point in history. This allows us to research very good titles of nobility.

Quality Standards of our Barony Titles:

We have Baronies with hundreds of years of history. All our French, German and Italian baronies and titles are confirmed by the Magistracy, Notaries and Courts, with the most scrupulous and utter respect for legality. So, just write us and enquire about the possibility of becoming a titled person. Baronial Titles are our very speciality, and no one else can give the quality and assurance of legality we offer.