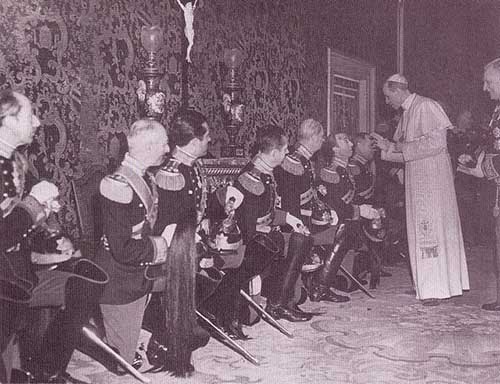 The Black nobility dressed in black as a form of political protest for 59 years (1870-1929), and was the most conservative and loyalist faction of the Roman Nobility, which remained firmly faithful to the Papacy after the Unification of Italy and the subsequent Conquest of the Pontifical States by an army of the Royal House of Savoy in 1870.

Members of the Black Nobility held high offices in the ranks of the papal administration, and were required to wear strictly the court dress, the legendary and strict “Spanish Black”, a mortuary-like colour. All members of the Roman Nobility of some significance with an allegiance to the Holy See would wear these black ceremonial garments. The Black Nobility wore these dark clothes in their unique form until 1968, when Pope Paul VI, with a decree about the Pontifical etiquette reformed the Pontifical Court with the suppression of part of these reminiscent Rococo adornments.

When an army from Piedmont entered Rome in 1870, The Pontifical States were absorbed by Italy, which unified in the form of a Monarchy under the sceptre of the Dukes of Savoy, now called Kings of Italy. The Black Nobility did not believe in the political idea of Italy, and were staunchly loyal to the Holy See. Therefore, when the new Kings of Italy entered Rome, the Black Nobility closed the doors of their Palaces as a sign of protest against the invasion of Rome, the New Italy, and the Royal House of Savoy, and hung Black Mourning Crepes from the balconies of their houses, manors and Palaces.

This had a double meaning: “The Spanish Black” was the official ceremonial colour of the Papal Nobility, and also a symbol of mourning. Many of the families of the black nobility closed the doors of their palaces in an act that expressed mourning as a sign of dissent and refusal towards the new sovereigns, until at least 1929, the year of the Lateran Pacts. Some families did not open again their palaces till 1970, even many years after the Italian Monarchy had ceased to exist.

The original “Spanish Black” colour worn by Black Nobility and the Papal Court Officers can be seen in his original radiance as worn by the “Spanish Aristocratic Mourners” in the world famous painting “The Burial of the Count of Orgaz”, by the Greek-Spanish-Italian Painter known as “El Greco” (The Greek).

Many families of the Black Nobility were called “Marquises or Counts of the Canopy”, in reference to the Court Positions they held within the Papal Administration.

Origins of the Black and White Nobility:

The origins of the Black Nobility are in the original dissimilarity between the landed and feudal nobility originated from the ancient Roman Baronage and the nobility resulting from the exercise of municipal offices of the Roman City, first of all those of Senator and Magistrate. This noble social caste lived around the power of the Popes and Cardinals, while continuing to separate hierarchically within it depending on the prestige of the posts held.

At the beginning, the positions of Prince Assistant to the Papal Throne, Marshal of the Conclave and Grand Master of the Holy Hospice were reserved exclusively for the families of the Ancient Baronage of Rome. These families increased over the centuries with the arrival of new “Pontifical Families “established in Rome and also with the inclusion of other families that profited in various ways by the temporal power of the bishop of Rome and in particular also indicates that part of nobility that, after the taking of Rome, remained loyal to the Sovereign Pontiff, the King-Pope.

There was another part of the Roman Nobility called the White Nobility, that, while remaining loyal to the Pope, they also joined the new nobility of the new Italian sovereigns of the House of Savoy.

Among the Roman Aristocracy we must cite the Roman Princely families and those called “Marquises of the Canopy”, who held traditionally inherited Administrative and Palatine Positions at the Pontifical Court, such as the Ruspoli, Colonna, Orsini, Massimo, Montoro, Serlupi-Crescenzi, Gaetani, Borghese, Chigi, Gabrielli, Guglielmi, Massimo-Lancellotti, Aldobrandini, Pallavicini, Odescalchi, etc.

There were other families that over the centuries had received from the Roman Pope nobility titles or other privileges, such as the Torlonia, Teodoli, Soderini, Gallo di Roccagiovine, Senni, Ricci, Parracciani, Lepri di Rota, Rocchi, Nannerini, Datti, Pietromarchi, Pacelli, Rocca, Pecci, and Cantuti -Castelvetri. A great percentage of the members of the above-mentioned families usually belonged to the Pontifical Noble Guard, the famous “Swiss Guard”, which were the ceremonial “Praetorians” of the Roman Black Nobility.

Also belonging to the papal nobility, albeit with minor ranks deriving from the vitality ecclesiastical office that covered, always directly connected to the Roman Pontiff, they acquired the personal nobility of the patricians of Rome (non-transmissible to the heirs) the knights holders of Papal Equestrian Orders.

Among the white nobility there were Boncompagni-Ludovisi, , Caetani, Cesarini-Sforza, Doria Pamphili, Schiaratura, Lovatelli, Pallavicini. These were families eager to get new recognition from the new masters of Italy, the Savoys.

Similarly, in the territories incorporated to the Kingdom of Italy after the unification, many minor noble families, who had received the “Militia Aurata” before 1841, when this Equestrian Militia was still an important rank and granted ennoblement by the Holy See, or was conferred on evidence of nobility and conferring the hereditary nobility, to members of certain pontifical equestrian orders.

It is necessary to further clarify the concepts of a “Pontifical or Papal Nobility”, and also of the story of the Princely and Baronial Families of Rome in other articles.

The Black Nobility, or more precisely the Venetian Black Nobility, explained by authors John Coleman and Jan van Helsing, describes it as the Venetian mercantile class that definitively affirmed its power in the first of the three Crusades, from 1063 to 1123, on the Republic of Venice transforming itself into an aristocratic oligarchy in 1173 with the institution of the High Council, which held the exclusive right to appoint the Doge of Venice.

In addition to the Venetian one was also added that of Genoa, which also had important commercial rights since the twelfth century. The “Venetian Black Nobility” as described in many internet sources belongs to the field of “conspiracy theories”, being frequently mentioned in sensationalistic stories.