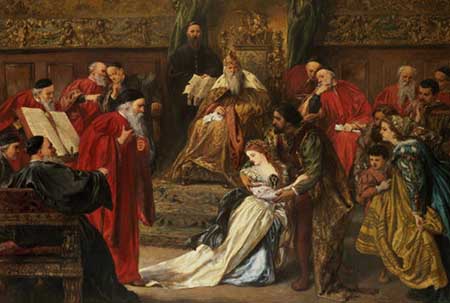 “The Roman Nobility was the most sophisticated caste of Machiavellian aristocrats that ever existed in Italian history”, as quoted by Michele Arditi, a Neapolitan nobleman, lawyer, and famous author and antiquarian in the XIX century.

The Roman princely families included some Roman clans who had a princely title awarded by the pontifical sovereigns. The existence of this elevated and almost legendary social group of Roman Princes and Dukes, who represented the ancient Roman Aristocracy, was intermittently recognized by the Kingdom of Italy.

The representatives and heads of the aforementioned families always owned Princely and Ducal Titles based on their surnames.

The Roman Nobility class composed of Roman princes and dukes was a very small and elite club limited to the families that were recognized as such by the Capitoline Heraldic Council the 17 of January 1854. The requisites to qualify for admission were to have a permanent and real domicile in Rome, and have been awarded the rank of Prince or Duke by the Roman Pope. The very ancient style of address and treatment due to these families was very formal and regulated. The heads of the families and their legitimate children and heirs were entitled to use the traditional Spanish particle “Don” as a prefix before their baptismal names and are sanctioned to use some special heraldic ornaments as well as the treatment of H.E. Example “His Excellency, Don Enrico, Prince Orsini” (Illustrative example).

Official Roll of the Nobility of Rome:

The heads of the princely and Roman ducal families, acknowledged by the Capitoline Council on the 17th of January of 1854 were expressly registered as Roman Patricians in compliance with the sovereign will by the Pope Gregorius XVI, as expressed in his chirographic documents of 2 May 1853.

1. Princely and Ducal Families of Rome:

Holding both a Roman Principality and a Duchy at the same time:

Holding a Title of Prince

Holders of a Duke Title

Among the families listed above, the Capitoline Heraldic Congregation identified those who had one or more pontiffs in their genealogy, and therefore somehow participated in the sovereignty, inscribing them in a special and separated roll as ” Conscript Nobles of Rome”: The list of families holding this privilege is as follows: Aldobrandini, Della Rovere, Borghese, Altieri, Barberini, Boncompagni Ludovisi, Caetani, Chigi, Colonna di Paliano, Colonna di Sciarra, Corsini, Doria Pamphili, Ludovisi-Boncompagni, Odescalchi, Orsini, Ottoboni, Rospigliosi.

Heraldic Privileges of the Roman Nobility:

The Coats of Arms of these families of the roman nobility are represented in the banner of the Apostolic Chambers, attached to the Papal Keys.

Regarding the Heraldic Privileges of the Roman Nobility, the Roman princes adopted “the circle with the flap of ermine, as that of the Princes of the Holy Roman Empire, given that the Pope is depositary of the sovereignty of the empire”.

Marquises of the Canopy:

According to ancient tradition, the Roman marquises, known as “di baldacchino” (Marquises of the Canopy), according to the Senator and Academic Professor Giovanni Farelli, are the families of Teodoli, Patrizi-Naro-Montoro, Afan de Rivera-Costaguti, Serlupi-Crescenzi, Sacchetti and the Counts of Soderini.

This expression is born from the fact that traditionally a few families of the Roman Nobility, usually holding titles with the rank or Count or Marquis, and very similar in prestige similar to those of princely Rank was reserved the privilege to raise in their palaces the canopy with a golden trench underneath, facing the wall, in the absence of the Pope, to receive the possible visit of the Pontiff.

The ducal families and those of the marquises of canopy were considered almost belonging to the same category and all the members enjoyed the same treatment.

Precedence and Protocol in the Roman Nobility

Roman princes universally took precedence over the princes of the Holy Roman Empire. Therefore the imperial princely Grants, awarded to some Roman princes, did not increase their dignity and in some cases the title were not even used. The leaders of the papal families and their legitimate spouses enjoy the treatment of “excellence”, also given to the heads of the Roman princely families. Regardless of their titles, the leaders of the papal families have traditionally been considered as “equal” by the “sovereign families”, being this courtesy due to the fact that the sovereign pontiff is recognized as “pater principum et regum” by the Christian Kings and as representative of the first and oldest Christian monarchy.

The Baronage of Rome:

Roman Baronial families are considered noble families that in the middle Ages had a great political influence in Rome, many times subordinating the nomination of the Popes or their politics to their interests, sometimes even directly imposing their appointment, and in their turn greatly benefited from pontifical nepotism.

The very introduction of the term barons was in all probability due to a papal reception of southern customs. The Normans in the Southern Kingdom of Naples used the word Baron to indicate the lineages endowed with noble possessions. However, profound differences distinguish the feudal lords of the Kingdom of Naples from the Roman barons, whose lordships were of an allodial and non-feudal nature, therefore completely autonomous from the papal power.

Use of the Term Baron as “Magnate”

The term Baron is used in the ancient sense of the term, as Magnate. This use continued to persist even in the neighboring Kingdom of Naples, until the conspiracy of the barons, when the term “Baron of the Kingdom” indicated the highest dignitaries, superior even to the princes with fiefdoms, the highest dignitaries, duchies or of the great holders of Lordships.

Later, during the sixteenth century, the custom of naming such illustrious families as “Baronial” was lost and the denomination of Roman princely families became wider and more accepted, with the attribution of new Princely Titles. Since 1500 the title was reserved to the heads of the Orsini and Colonna families, until the new times led to the modification of the function and also to a limited number of illustrious families with the Rank of Marquises of the Canopy, one of the most peculiar titles of the ancient Nobility of Rome.

Merger of the Roman and Papal Nobility:

The old Feudal Families of Rome, often of Baronial rank, were a distinctive nobility class, independent of the papal or pontifical power. However, they were largely assimilated by the Papal Nobility in a slow process that took many years. The Black Nobility (A faction of the Papal Nobility bitterly opposed to the Unification of Italy), and the Papal or Pontifical Nobility are in fact interlinked and intermixed with the Ancient Roman Nobility.