The Nobility of Norway 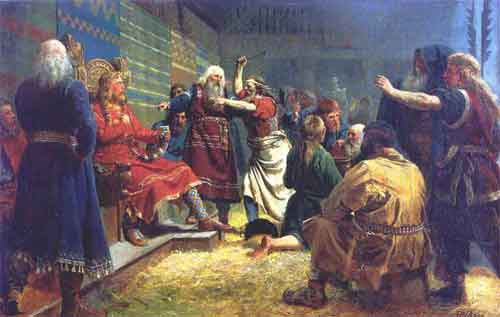 The Norwegian Nobility consisted originally of warrior Chieftains, Earls (Jarls), and minor kings, before the unification of the Kingdom under the sceptre of Harold Fair Hair, known as King Harald I of Norway. A nobility in the true sense of the word was unheard of until the middle ages.

In early times, Norway was divided in Fylkis (Counties), at the head of which was a petty king, chief or Jarl. The Fylkis were divided into Herads, headed by a Hersir, who held his office and position by hereditary right, and who, like the Icelandic Godi, presided over the civil and religious affairs of his districts.

After King Harald’s great victory at Hafrs Fiord, near Stavanger, by which the power of the western chiefs was finally broken, and every man compelled to have the King as a Master. The Fylkis were put under the rule of Earls, and the Hersirs became or were replaced by the King’s Lendermenn, a title which becomes familiar in subsequent history, and who gradually developed, especially in the 13th century, into what we may call a Native Nobility.

The Lendermenn enjoyed hereditary privileges and had a higher personal right over the commons, and in civil strife only had to answer to the Royal Court. These Lendermenn, however, should not be mistaken for an official nobility who took their strength from the King. They were without doubt the King’s Men, bound to support him by oath and allegiance, and follow him in war. They normally received land from the King in return, from which they derived their name. Nevertheless, they still were for a long time merely the old Hersirs under another name, powerful local chieftains who were ready at any moment to lead against the King their dependents and free proprietors by whom they were surrounded. 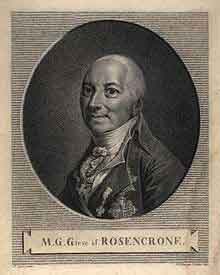 The Principal Earldoms of Norway were those of Hlada, Moeri (to which belonged Earl Rognwald, ancestor of the Dukes of Normandy), the Orkneys and the Hebrides. The last was surrendered to Scotland by the treaty of Perth of 1268, but the Orkneys with Shetland continued a Norwegian Earldom until 1469. King Haakon invested Henry Saint Clair at Marstrand, whose mother was the heir of the Old Norse Earls, as Earl of Orkney and Lord of Shetland the 2nd of August of 1379. However, the investiture took place under certain onerous restrictions. While the Earl could enjoy the Earldom for himself and his male heirs, and certainly could govern the islands and enjoy the revenue during the King’s pleasure, he was forbidden by law to build any castle and was to be answerable to King’s Court at Bergen. Moreover, if he were to die without male issue, the Earldom would revert to the Norwegian Crown.

His Grandson, William, the third Earl of Orkney, was invested in 1484. However, he had to renounce and give up the title, as the Orkneys were gifted to James III of Scotland by Christian I of Norway, as a dowry for his daughter Margaret, who wed the Scottish king. In 1470, William resigned the title, receiving in compensation the Earldom of Caithness.

King Magnus VI, surnamed the “Lawgiver”, (1263-1280), introduced in 1277 the titles of Baron and Knight. These titles, however, were merely other names for Lendermenn and “Skutilsvende”, and did not increase the power or privileges of the nobility.

Although in Norway, as in other countries, there might have been found families which, by wealth, extensive possessions, high offices or personal endowments, held a conspicuous position and were esteemed by the people, they did not constitute a distinct class with hereditary privileges, or which had by law any preferential right over the populace. There were form the earliest times Jarler, Hertuger, Lendermenn, Herser, etc. Later, Barons and Knights. These were partly government offices and partly mere titles, to which no privileges were attached, and which were not hereditary.

When, however, it is maintained that there also existed a real nobility in Norway, it may be explained by the fact that the title, as well as privileges, de facto if not de jure, were transferred by Royal Decree from father to son; the sons of Lendermenn and the lower Hird class thus formed a kind of lower nobility and took up a privileged position. This class, however, did not last long. King Haakon VI (1299-1309) abolished the Barons or Lendermenn by a decree, without apparently even consulting his council and without encountering the slightest resistance.

They do not even reappear in the minority which followed, and which must have afforded them a very favourable opportunity of recovering their power. They had occupied for some time an anomalous and untenable position. They had gradually ceased to be the chiefs and representatives of the free landowners, and they had failed to assert themselves as a separate power by the side of the throne and never got any real hold of power.

The King was too strong for them after they had lost their old position, and he naturally preferred ruling through officers of his own, who were wholly dependent on him. Neither was there any room for the growth of a feudal nobility. On the one hand, the position of the crown was too absolute, and on the other, the people were too firmly rooted in their old traditional independence.

The mass of small landowners, among whom were the greater families by the partition of their estates, gradually sank back, ready to obey the King and his officers. However, they were not the materials on which an intermediate power could be vested. They admitted that the King had an odal right to his kingdom and a definite claim for service; but in the same way, they themselves had an immemorial odal right to their lands. Norway was, in short, during the early Middle Ages an absolute monarchy resting almost directly on one of the more democratic states of society in Europe. This explains why it has been thought that Norway, before the treaty of Calmar in 1397, possessed no nobility.

The question of Armorial bearings in Norway is proved beyond doubt by the several volumes published so far, of the monumental “Norske Silliger”, a work illustrating the Norwegian seals during the middle ages, and which contains between the years 1286 and 1375 no fewer than 909 facsimiles of different seals attached to various documents, the majority of which are purely heraldic, and show that before the year 1300 heraldry had passed out of its elementary stage in Norway, and was more advanced than in Scotland.

When by the union of Norway and Denmark, a great number of Danish nobles settled in the country, and the Kings from the time of Eric of Pomerania bestowed titles upon a few Norwegians, the country again received a Nobility of its own, although these nobles never became numerous.

From 1671, Norway had, together with Denmark, a landed nobility with titles of “Greve” (Count) and Baron. The titles of Duke and Viscount are after 1397 unknown in Norway, and there have only existed two earldoms and one barony. These were the Earldom of Laurvigs and Griffenfeld, and the Barony of Rosendals.

The Earldom of Laurvigs was established the 29th of September of 1671 for Ulrick Frederick Gyldenlove, an illegitimate son of King Frederick III, and was made hereditary the 27th of February of 1692 for the grantee’s son and his male descendants. 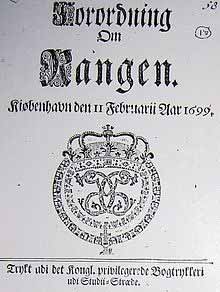 The Earldom of Griffenfeld (Jarlsberg) was established the 26th of November of 1673 by King Christian V for the famous minister Peder Griffenfeld (Schumacher), and was in 1675 extended and called Tonsberg Grevskab. When Griffenfeld “fell”, the 26th of May of 1676, the earldom was confiscated by the Crown, and in 1678 transferred to the possessor of Laurvigs, U.F. Gyldenlove. In 1683, the Earldom was sold to Field Marshall Friherre af Wedel, for whom a separate earldom was made under the name of Grevskabet Jarlsberg (Wedel-Jarlsberg), and it has since remained in this family.

The Earldom of Laurvigs passed on the death of Gyldenlove in 1704 to his son. In 1785 it came, by order of the Supreme Court, into the hands of the Ahlefelds family, who again sold it to the king of Norway and Denmark, who granted as a substitute a feoffment capital. By a secret treaty at Kiel, the 14th of January of 1814, King Frederick VI reserved for himself the Earldom of Laurvigs as a personal property, and sold it in 1817 to a private company. It ceased to be an earldom in 1805.

The only Norwegian Barony was the called “Rosendals Baroni”, established the 14th of January of 1678 for the Dane, Baron Ludwig Rosenkrands. In 1723 it reverted to the King by the death of the last male member of the Rosenkrands family. It was afterwards sold in 1725 to the Vice-Stadtholder of Norway, Ditlev Wibe, with a Baron’s rights, but without the title. It came by the death of Wibe into the Lerches family, and was in 1745 sold again to Bishop Edvard Londemann de Rosencrone, who on the 9th of September of 1749 succeeded in establishing a “Stamhus” (ancestral home).

His son and successor, Marcus Gerhard Landermann de Rosencrone, obtained in 1799 for the “stamhus” the title of Barony, but without it being a feudal tenement. In 1809 it was granted that after his death the estate should still remain a barony and its owner a Baron. When he died, Rosendals came into the hands of his grandson, Major Christian Henrik Hoff, and his sister, who the 3rd of February of 1812 obtained permission to take the title of Baron Hoff-Rosencrone. The Barony passed on his death (1837) to his son, Gerhard Hoff-Rosenkrone, but ceased according to the law of 1st of August of 1821 to bear the name of a barony or its owner the title of Baron.

The title Marquis has been conferred only twice. Firstly, the 22nd of April of 1709, upon Hugo Octavius Accoramboni, as Marquis of Lister, in the diocese of Christianssand. Lastly, the 24tf of November of 1710 upon Franciscus di Ratta, Senator of Boulogne, as Marquis of Mandal, in the same diocese. Both these families are now extinct. By law of 1 August 1821, it was enacted that hereditary nobility should cease, but that those born to a title before this date should retain the title during their lifetime, provided their right to it before the first parliament that assembled after its passing. There are now no male descendants of such families, and consequently, no nobility exists in Norway. This law does not affect foreign noblemen residing in Norway.