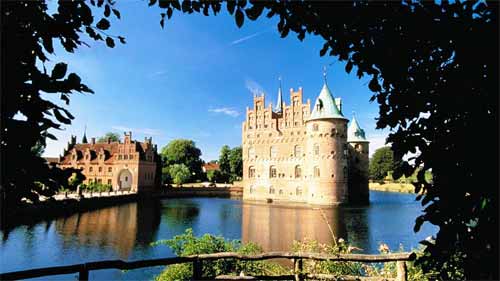 Titled Nobility was unknown in Denmark before 1671, when the power of the old nobility, having been broken by the introduction of the autocracy and by the abolition of the old state council, King Christian V, by a decree of 25th may 1671, instituted a new Nobility with the titles of Count and Baron, in order to create a similarity between Denmark and the western powers, and at the same time to strengthen the authority of the crown.

He accordingly erected 31 estates into Counties and Baronies, according to their size and rental, with the title of Count or Baron for their holders and their descendants, upon whom the said estates were strictly entailed, according to the law of primogeniture. At first, only the owners of landed property of a certain size could obtain the title of Count or Baron, but after a while, these titles came to be conferred without regard to the possession of land. In addition to the counts and barons, other families have from time to time been ennobled or received into the Danish Nobility by Letters Patent, but without any title being granted.

The title of Viscount is quite unknown in Denmark, but that of Duke has been given on one occasion, the exception being in favour of Elie Louis, Count and afterwards (1820) Duke Decazes, who, in consideration of his connection with the old reigning Dukes of Glucksberg, was 14 June 1818 created Duke of Glucksberg.

That of Marquess was given two occasions to people, being these titles also recognised in Norway for a time. We are speaking of Hugo Octavius Accoramboni and Francisco di Ratta, Senator of Bologna, being created Marquess of Lister (Markgrever af Lister), the 22nd of April 1709, and Marquess of Mandal (Markgrever af Mandal), 24th of November 1710, respectively. Their issues, however, now extinct.

The following are the 17 Counties and the 14 Baronies now existing in Denmark, with the names of the families possessing them, and the dates of their creation.

Of the other twenty families possessing the title of Count, and the thirteen possessing that of Baron, a few (Blixen, Brockenhuus, Plessen, Rantzau, Rosenkrantz, Schulin and Skeel), are owners of ancestral mansions, but most of them are without any landed property in Denmark.

There are also 159 existing untitled noble families, of whom, however, 46 belong to the lost provinces or reside abroad.

Among foreigners who have received the title of Count in Denmark maybe named two Englishmen, Edward Ferral, created Count Ferral-Bourke on 31 May 1842, who died without issue the 1 of July of 1868, and Charles McCarthy, who on 27th of April of 1831 was endowed with the title of Count for his own life.

In the case of Counts, only the head of the family and his eldest son and daughter (provided she is the first born child), carry the title of Count, and take precedence at court as such; all the other children have the title of Baron (Or Baroness) before his Christian name and take precedence as such only. In a few cases, however, some families have obtained by a special royal warrant the title of Count or Countess for all their members both male and female. However, in one family, that of the Counts Raben, the younger sons and the daughters have no title.

The titles of Count and Baron in Denmark can never be inherited through the female line, if an estate with the title of Count or Baron attached descends to an heiress by the extinction of the male line of the family; a special royal grant is required before her children can take the title. By the Constitution of 1849, the Danish Nobility were deprived of all their privileges, with the exception of their titles and of the right of nomination for their daughters in the various convents for the noble women.