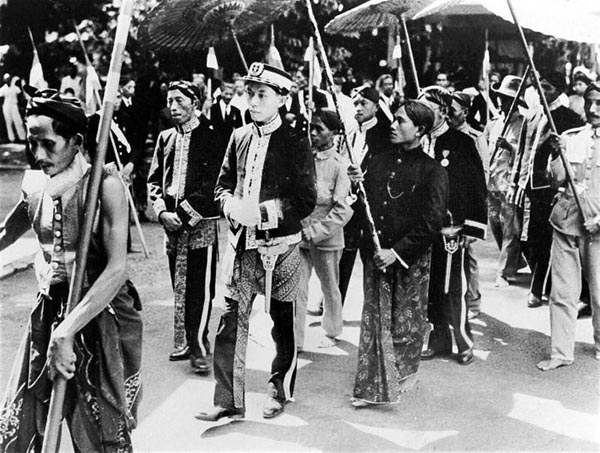 The Indonesian Nobility is the largest Muslim Aristocracy of the world. Nowadays, since 1945, Indonesia is a Republic, in which, despite nobility is no longer recognised as such, some of the Former Ruling Royal Families of the Kingdoms and Princely Estates of Indonesia have important legal and customary rights. Probably, the Indonesian Nobility is one of the most complex nobility systems of the world, where nearly 300 Royal Houses have been recognized as the legitimate descendants of the former Kingdoms and have a customary role in society, protected by the laws of the Republic. This makes the nobility of Indonesia the most original nobility of the whole world.

Legal Status of the Indonesian Nobility:

In 2007, the Indonesian Parliament passed a law formally recognizing some residual rights to around 300 Indonesian Royal Families. This law permits the descendants of the royal families and Indonesian Princely States to seek government help, particularly for the preservation or restoration of palaces and the financing of traditional and symbolic festivals. The status of the Indonesian Nobility is that it is not legally approved, but socially tolerated by the people and government.

Religion and Nobility in the Indonesian Republic

Indonesia is the biggest Muslim country of the world by population. Therefore, by sheer numbers, it is often concluded that the biggest Islamic nobility class lives there. However, there is much more diversity than one could think. Not all the Kingdoms were Muslim, but many of them were of Hindu Tradition and had Hindu Beliefs, while others converted to Christianity. Hence, Muslim, Indian and Christian members of the nobility live together in a culturally rich environment.

The Historical Nobility of Indonesia:

The Nobility of Indonesia is comprised by the more than 350 royal families that ruled the Indonesian Princely Estates, plus the customarily recognised nobility of each particular Kingdom. Their members form an ancient nobility of blood whose noble titles are many times socially, traditionally and routinely recognized but which no longer have legal privileges. The Chiefs of these Royal houses still have in some cases a representational and ceremonial role. There are also ceremonials and formal procedures by which nobility titles may be granted to a certain kind of people, only if some requisites are fulfilled and in very extraordinary cases in which it was traditional to confer nobility.

The Indonesian Nobility is what it is known as "Historical Nobility", composed of two kinds of members:

The Nobility of Java

Furthermore, in the Island of Java, main isle of the Indonesian Archipelago, the descendants of the Javanese Nobility that were granted noble status in the XVI and XVII century by the Sultan Agung of Mataram, called "Priyayi", are frequently identifiable by their surname, which is not a prevalent institution for the vast majority of Indonesians. Therefore, the possession of a surname in Java, is often associated to nobility.

The ancient nobility of Bali and Balinese society is organized according to a system known as “castes”. It is in fact divided into four categories which are named after the Varna social order system of Hinduism: Brahmana, Satria, Wesia and Sudra. The famous anthropologist Bronislaw Malinowski is of the opinion that "the Nobility of the Kingdom of Denpasar (Bali), is actually a system of titles of Nobility based on the customs of India".

Divinity, Mythology and Nobility in Indonesia: The Bugis of Sulawesi

The Nobility of the Indonesian peoples called "Bugis" is located in the Island of Sulawesi. The Influence of folklore and legends among the Bugis of southern Sulawesi is very strong. The tradition still recognizes people “of white blood”, as the descendants of Devas, also called Dewatas (similar to Angels or Demi-Gods), dissimilar from those of “red blood”, that is to say people belonging to the commonality and descendants of slaves. This division of the Bugis society is already found in the great epic poem Sureq Galigo, whose oldest parts may have been written as early as the thirteenth century. It is important to mention the peculiarity of this institution, where royalty and nobility, according to the legends of Indonesia are descended from the gods and have "blood as white as light".

In the old Bugis nobility and royalty, the highest status after the hereditary position of ruling Chief was that of "ana-ma-tola", who had the right to inherit the royal title of his parents as ruler. Below the sovereign and his heirs we find four ranks of subsidiary nobility. Below that rank, we can only find free men.

Titles of Nobility and Ranks in Sulawesi:

From the very beginning of the 20th century, the ethnic nobility of the Indonesian Bugis uses the noble title of "Andi" for ana -ma-tola and the two ranks directly lower. The other two aristocratic ranks are authorised to use the title of "Daeng".

The formation of the Dutch Indies, which will become the Republic of Indonesia by proclaiming their independence in 1945, was a long process of on-going aggregation of different states starting in 1604 and 1605 with the military occupation of Ambon in the Maluku Islands, at that moment under the dominion of the Portuguese, by the Dutch East India Company. At the time, this Indonesian archipelago is home to a large number of fundamentally coastal political entities, which we shall call "The Indonesian Princely Estates".

"Sultan": The first Javanese Royal to take this title is Prince Mangkubumi, who obtains from the Executive Council of the Dutch East India Company the territorial division of the Principality and Kingdom of Mataram in two during the treaty of Giyanti in 1755, of which he receives half. He then takes the title of Sultan Hamengkubuwono “the one who can carry the world in his lap” and establishes his Princely State in Yogyakarta, near the city of Surakarta. There were listed as sovereign estates in Java another four Sultanates. In fact, the title of Sultan was carried by the heads of the royal houses of Gowa, Luwuk and Tallo after their conversion to Islam.

"Sunan": this title means “the one you have to pay homage to”, and can be translated as Monarch. This is the title traditionally used by the ruling chiefs of Surakarta in the island of Java.

"Pangeran": this nobility title, which means Prince, makes reference to either the male members of the royal families or the sovereigns of the two “minor” royal houses of Mangkunegaran in Surakarta and Palualaman in Yogyakarta.

"Raden": this noble title, when it is used alone, implies that the holder has nobility of blood by birth, whether it comes from royalty or from non-royal or feudal nobility.

Priyayi Families of the Indonesian Nobility

In the Dutch East Indies, the titular holder of a significant administrative position used normally the noble title of Raden, followed by a word indicating his function: Raden-Adipati for the political position of regent. Nowadays, the title of Raden is still granted in customary manner by the Monarchs of Surakarta and Yogyakarta to worthy personalities, generally in the form of Raden-Temukung.

The Nobility of Kalimantan

This nobility lives in the Indonesian part of the island of Borneo, called Kalimantan.

The Malay Principalities of Indonesia:

"Panembahan": this title of Javanese origins is worn by vassal princes of kings or sultans, such as the Panembahan of Mempawah in the western regions of the Kalimantan.

Arung: aristocratic title that can be translated as "chief"

Etiquette and Protocol in the Nobility of Indonesia

The order of precedence of Indonesian nobility titles is the opposite of what is expected in Europe. The order of precedence starts from the lowest-ranking title and moves up to the premier title in the nobility hierarchy. “As the gods and goddesses descend into this world, they come, one by one, in reverse order of status. The last to arrive and be received is the highest god and his wife". The Divine and Religious Hierarchy of the gods is indeed echoed by the Nobility and Royalty of Indonesia in their protocol and ceremonial.

The Nobility of Sumatra:

The main Sumatran nobility titles are as follows:

Mokole: sovereign of a principality located in the Small islands of the Sonde

Datuk: this traditional noble title is granted by a council to a commendable character.

Sutan: this noble title of the kingdom of Minangkabau designates the descendants of royal families.

Depati: this title of Javanese origin was worn by the Sovereigns of the ancient Principality of Belitung

Traditional Symbols, Rituals and Ceremonial Role of the Nobility in Indonesia

The traditional Festival of the nobility and Royal Courts of Indonesia is an event during which shows and exhibitions present the culture of the different royal and princely courts of Indonesia, called "Kraton".

A princely state of Indonesia is a past political entity located in what is now the territories of the Republic of Indonesia, ruled by a sovereign chief who could use different titles such as Sunan, sultan, king, etc. By the end of the XIX century, there were more than 360 Kingdoms. They are do not correspond to the notion of kingdom prevalent in Europe. These princely states were abolished with the proclamation of independence from the Dutch, and the subsequent creation of the Republic of Indonesia in 1945. However, the royal families of many of these kingdoms still exist. Many were able to keep their palaces and sometimes even the government built a new one for them. Many of the chiefs of these princely houses still play a ceremonial and ritual role in local politics. Nobility is alive and well in Indonesia.

In Java, the colonial administration had transformed the princely states into residencies. The Republic of Indonesia abolished the Dutch colonial residencies and transform some of them into provinces and departments.

Since the resignation of President Suharto in 1998, a new movement has been trying to revive the nobility of these ancient princely states. In 2001, for example, the Governor of Kutai Kertanegara reinstated the sultanate of the same name. In 2004, a new sultan was crowned in the city of Pontianak, the capital of the West Kalimantan Province on the island of Borneo.

Some princes try to play a political role. In 1999, the Sultan of Ternate in the Maluku Islands tried to be named as governor of the newly created North Maluku Province. In 2003, the Prince of Mempawah in West Kalimantan ran for political elections. Personalities such as the Sultan of Bima on the island of Sumbawa or have always continued to be respected as local, even national, figures as the Sultan of Yogyakarta. Nobility is still important in the Lands of Indonesia.