Turkish and Ottoman Nobility and Royalty 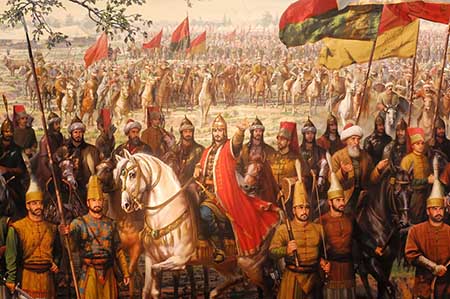 The Turkish Nobility was a very powerful, ancient and international social class that helped the sultans rule the Ottoman Empire for nearly five centuries, from 1453 till 1918.

Origins of the Turkish Nobility and Royalty

The legendary origin of the dynastic royal family of Turkey, the Osmanlis, goes back to one of grandsons of Noah, named Oghuz, originator of the Oghuz tribe in Central Asia. The first Turkish monarch was Osman I Han Gazi, of the Kayi kinfolk, in the Oghuz clan, in the late 13th century. His heirs were able to transform their lands into a prevailing multinational empire, climaxing in Constantinople’s downfall in 1453 and the subsequent annexation of the Byzantine Empire. Afterwards, the Turkish sultans occupied Egypt, Syria, the Balkans, and parts of Hungary. They also subjugated Crimea, Mecca and reigned over Algiers and Baghdad. They even surrounded Vienna, without success, in 1529 and 1683. Decay started in the 17th and 18th centuries when joint European forces took over large territories in the Hapsburg and Russian empires. In the 19th century, Greece, Romania, Serbia, Bulgaria and Northern Africa were able to secure their independence or to seek protection from European powers. The last step was the separation of most of the Arab lands as a result of World War I. The sultanate was abolished in 1922 by the current Republic of Turkey.

Complete Honours, Titles and Styles of the Sultan of Turkey

His Imperial Majesty, Head of the Dynasty, Sovereign of The Osman Family, Sultan es Selatin (Sultan of Sultans), Khakhan (Khan of the Khans), Caliph of the Faithful, Servant of the Cities of Mecca, Medina and Kouds (Jerusalem), Padishas of The Three Cities of Istanbul (Constantinople), Edirne (Andrinople) and Bursa (Brousse), and of the Cities of Châm (Damascus) and Misr (Egypt), of all Azerbaijan, of Maegris (in Ethiopia), of Barkah, of Kairouan, of Alep, of Iraq, of Arabia and of Ajim, of Basra, of El Hasa, of Dilen, of Raka, of Mosul, of Parthia, of Diyarbakir, of Cilicia, of the Vilayets of Erzurum, of Sivas, of Adana, of Karaman, of Van, of Barbaria, of Habech (Abyssinia), of Tunisia, of Tyrabolos (Tripoli), of Châm (Damascus), of Kybris (Cyprus), of Rhodes, of Candia, of the Vilayet of Morea (Peloponnese), of Ak Deniz (Marmara Sea), of Kara Deniz (Black Sea), of Anatolia, of Rumelia (the European part of the Empire), of Bagdad, of Kurdistan, of Greece, of Turkestan, of Tartary, of Circassia, of the two regions of Kabarda, of Gorjestan, of the plain of Kypshak, of the whole country of the Tartars, of Kefa and of all the neighbouring countries, of Bosnia and dependencies, of the City of Belgrade, of the Vilayet of Serf (Serbia), with all the castles and cities, of all the Arnaut Vilayet (Albania), of all Iflak and Bogdania, as well as all the dependencies and borders, and many others countries and cities.

APPENDIX OF TURKISH AND OTTOMAN TITLES OF NOBILITY

Aga : Commander, post-title given to senior officers of the Army and of the Imperial Household

Bey Efendi, Bey Effendi : post-title of the Damad, husband of daughters of HIM (hereafter Bey Efendi)

Beylerbey: literally, Lord of Lords, title given to the ruler of a great province

Beyzade: son of a Bey

Damad: literally son in law, title of the son in law of HIM, or of the Head of the Imperial Family, if married during the latters’ reign (in modern Turk, Damat)

Gözde: literally, noticed (by the eye of the Emperor). Refers to ladies of the Harem who were not official wives (Kadin Efendi) or official regular favourites (Ikbal, Ikhal Efendi)

Hâdim ül Haremeyn ish Sherifeyn : Protector of the Two Holy Cities (Mecca and Medina), a title awarded to Selim I by the Sherif of Mecca

Hanim: 200 years ago, equivalent to Lady, a qualification given originally in the 16th century to Pcesses from the Byzantium Empire and from Kingdoms in Anatolia who did marry the Sultan, to make a distinction between them and the slave wives of the Sultan. The word Hanim comes from Hatun (or Khatun) that is still translated in modern Turkish as Mrs.

Hanim Efendi: post-title of the wives of the sons and male descendants of HIM

Hanim Sultan : post-title of the daughter of daughters of HIM and of sons and male descendants of HIM (translated as Pcess)

Haseki Kadin Efendi: post-title of the mother of HIM’s daughter

I without dot: rendered as I

Ikbal, Ikhal: literally fortunate, refers to official favourites of HIM

Ikbal, Ikhal Efendi: post-title of an official favourite of HIM

…li, …lu: post-name attached to place names, it indicates the town of origin of a person

Padishah: Padishah (“pâdshâh” in Persian) is the correct translation for Emperor (short form of pâdshâh-e ‘âlam, “Emperor of the World”). This title was next to Shâhanshâh (“King of Kings” or Supreme King) and Shâh-e bozorg (Great King), traditionally the title of all Persian monarchs since Kyros II The Great. Later the Moghuls and Ottomans adopted the title of Padishah, as well, because Persian was the official court language in Dehli and Istanbul (thanks for this to Amirzadeh Arian Kazem Khan Zarrinkafsch Zarrinnaal, of the Mirs and Schahzadehgi Zarrinkafsch of Sinneh in Iran)

Pashazade: son of a Pasha

Shehzade: title of sons and male descendants of HIM

Sultan: post-title of daughters of HIM and of sons and male descendants of HIM

Sultan Han : HIM The Sultan

Vali: The title Vali is also Persian, meaning “governor-general” of an important province, comparable with the European margrave. Thus, Vilayat means “rulership”, “realm” or “province” of this person. In Iran until the 20th century. The provinces called “Vilayat” only were several of the large main regions like Azerbaijan, Kurdistan, Fars, Eraq, Gilan and Khorasan. Now the term is in use not for a regional province anymore, but for an administrative province. Turkey also adopted this administrative system (thanks to Amirzadeh Arian Kazem Khan Zarrinkafsch Zarrinnaal, of the Mirs and Schahzadehgi Zarrinkafsch of Sinneh in Iran).

Valide Sultan: mother of HIM , equivalent to Queen Mother

THE TURKISH CONCEPT OF PERSONAL NOBILITY

It is difficult to refer to the Nobility of Turkey in the Western European understanding of the word (ie honorary titles conferred hereditarily) since most of the titles were personal, according to the function held in the Empire.

This does not mean that these titles were not held within the same family for several generations, but if so, only on a personal basis.

The title of Pasha was awarded to the titulars of the office of Vizier (equivalent today to Minister), of Mushir (Marshall), of Ferik and of Liva (Generals) and of Beylerbey (Governor).

The title of Bey was awarded to the son of the Pasha who wore this title with the title of Pashazade, to the Miralai (Colonel) and to the Kaymakam (Lt Colonel), as well as to numerous civil servants. The title of

Bey is somewhat equivalent to the title of Lord in the UK, which is not always transferable.

Surnames of the Ottoman and Turkish Nobility and Aristocracy