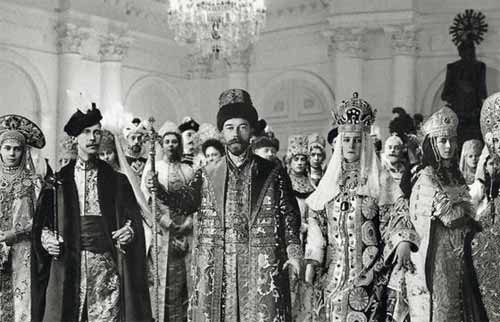 The Russian Nobility was the social ruling class of the Russian Empire for centuries.

Origins of the Russian Nobility

The Nobility of Russia did not exist as such for a long time, being a ruling class made up of two differentiated groups:

One of the biggest peculiarities of this ancient Russian nobility is the non-existence of noble titles, as there were only ruling princes. Nobility and the quality of being noble were defined by the possession of blood ties to one of the grand families, mainly the Rurik Royal family.

The Nobility of Russia begins to take shape: the fusion of the Princely families and the Boyars.

The unruly Feudal Rurik Princes and Boyars were always a limitation to Royal Power, and therefore, they had to be constrained. Consequently, Ivan III, Grand Duke and Prince of Moscow compelled all appanaged Princes to cede their territorial princedoms and receive in compensation large landed estates of a feudal but private nature. In addition, in order to make the princes and boyars more compliant with the monarchy, a very clever trick was instituted.

Ivan III founded a Genealogical Register in which the former ruling Princes were inscribed along with the Moscow boyars. It was a very important step in favour of the unification of the Russian Nobility into a single social class. The second step towards the fusion and merger of the princes and Boyars into a nobility dependant of the monarchy was a decree that established that henceforth, noble rank and social position was to be considered according to the dignity held by fathers and grandparents either at court or at the army. This Law was called Mesnichestvo, and was in force until 1682. The direct consequence of this was that the concept of hereditary nobility was introduced in Russia, as Boyars were made hereditary noblemen, and it also had the power to complete and finalise the process of fusion of the Russian Nobility into a compact and solid social group.

To further measures in this direction, Tsar Theodore abolished the Mesnichestvo and by a law of 12 January of 1682 enforced the bestowal of equal rights between all noblemen, regardless of titular rank or origin. Therefore, under the eyes of the law, a minor untitled boyar would have the same legal rights than a descendant of the Rurik Princely Families. The merger was now accomplished.

The famous Velvet Book: The Golden Book and Bible of The Russian Nobility

The Tsar and Emperor Theodore, elder brother of the future Tsar Peter the Great, established and commissioned the making of a Book that would mention and register all the nobility of Russia. It was based on the ancient genealogical records compiled under the Mesnichestvo ancient laws. This book was bounded in Red Velvet, and came to be known as The Velvet Book (barthatnaia knega). All the hereditary boyars and princely families were there. The importance of the book was such that if you did not appear in the “Bible”, you were not even considered a human being at all by the nobility of Russia.

The creation of the first proper Russian Noble Titles: Prince, Count and Baron

Russian nobility titles were created by the first time by Tsar Peter the Great (1689-1725). It was necessary, as there were many prominent families that needed to be rewarded.

The first Prince ever created in Russia was Alexander Danilovitch Menshikov. Peter the Great made him a Prince of the Russian Empire the 30th of May of 1707, with the style of Prince of Ijora, with the title of “Serene Highness” for him and his descendants.

The first Russian Count in the nobility of Russia was Field Marshall Boris Scheremeteff, created in 1706 by the same emperor.

The first Russian Baron ever created in the Russian nobility was the Vice-Chancellor Schafiroff, created in 1717.

The Introduction of Armorial Bearings into Russia in 1722.

Heraldry was not developed in Russia, and it appeared later than in other countries. Peter the Great established an official Heraldic Office headed by a Herald Master under the jurisdiction of the imperial senate. There is to note that the first Vice-Master was an Italian professional Herald whose responsibility was to create civic arms. Later, by order of the Emperor Paul (1796-1801). In addition, in 1780, most cities, villages and towns were ordered to adopt arms. Likewise, all the nobility of Russia was encouraged to adopt new arms if they had none, or register their existing arms, and a compilation of the armorial bearings of the Russian nobility was started, dividing and classifying the noble arms in six groups:

The Nobility of Russia: Corporate, Geographical and Administrative Organisation:

Acquisition of Hereditary Nobility and Classification of the Nobility in Categories

The Tsar Peter I introduced in Russia and the 12th of January of 1722 created a House of Nobles, placing at its head a Herald Master. The Emperor also decreed by law that all people in the service of the state with a certain hierarchical rank and all officers in the army and the navy beyond a certain rank acquired all hereditary nobility. We already talked of the efforts of Emperor Paul in establishing a heraldic office. Later, the Empress Catherine II instituted in each province of the Empire an Assembly of Local representatives of the Nobility, comprised of a Deputy for each district and presided by a Marshall of the Nobility of the Province. Among the duties of the Provincial Assemblies of the Russian Nobility was to keep records and rolls of the local noblemen and keep a book or register classified in six sections.

So, the Nobility of Russia was classified now according to these six groups:

Although by the 1682 law all the Russian Nobles enjoyed equal rights and privileges, they were divided into five categories or classes:

Ethnic Composition of the Nobility of Russia

The Russian Nobility was a global nobility, comprised of people coming from many different ethnic groupings. The Nobilities of Russia, Ukraine, Poland, Lithuania, Courland, Livonia, Estonia, Georgia, Crim-Tartary and Astrakhan all converged into the Nobility of the Russian Empire, where you could find Caucasian and Georgian Princes, Baltic-German Feudal Noblemen, Russian and Polish Boyars, and even descendants from Tartar Royal Houses and Tartar Khans. It was a unique mixture of different cultural and racial backgrounds. The Nobility of Russia was unique.

Marriage and Divorce Patterns of behaviour in the Russian Nobility

The Nobility of Russia was quintessentially prone to endogamy so they just married among themselves, and it was not accepted to marry outside caste. Foreign noble families were accepted, and only a few exceptions were made, normally in favour of marriage alliances with extremely wealthy families. Divorce in Imperial Russia did exist under the eyes of the law, but was anathema to society.

Noblemen seeking divorce would be stigmatised and ostracised by society, and their peers would strongly reject them. The only accepted form of divorce required another juridical form to take place. In some exceptional occasions, the Orthodox Church could annul marriages, and this was the only socially acceptable way of separating legally a married couple belonging to the nobility in Russia. If an economic settlement and the blessings of the church were obtained and permission given, the process would be more likely to be accepted by society. Divorce and Marriage Annulments were uncommon in old Russia, and even less common among the strongly prejudiced Russian Nobility.