Royal and Nobility Titles in Thailand 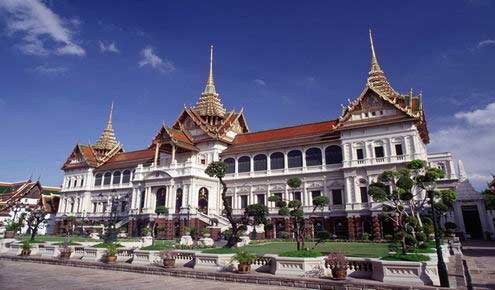 Also called Siam, the royalty and nobility of Thailand belongs to one of the most ancient noble systems of the world. Thailand is the only Southeast Asian country to have resisted foreign occupation and overlordship, under the leadership of the contemporary Chakri dynasty: they did develop a system of formal nobility titles and highly regulated honours and dignities for the extended royal family and also for other people that might be necessary to reward, as in all monarchies.

Titles of Nobility within the Thai Royal Family:

An intricate grading of titles was existing for the children of the King, according to the rank of their mother: King Chulalongkorn Rama V who had 151 wives and 77 children. This is much easier nowadays with all the children titled simply as Prince and Princess with the style of Royal Highness, although within this category there are several ranks, one of the symbols being the number of umbrellas awarded (up to 9 levels of umbrellas). The use and display of Royal Umbrellas, was a status code and symbol, not uncommon in Asian Kingdoms. In fact, in the neighbouring Laotian Kingdom, White Parasols were considered a very important symbolic sign of power, status and prestige, indicating a royal rank or the grade within a royal order of chivalry.

The Great-grandchildren of the King are always titled “Mom Rajawongse”, in short M.R. sometimes likened or compared to the British Lord and Lady.

The Great-great-grandchildren of the King are titled “Mom Luang”, in short M.L. sometimes likened to the formal treatment or form of address called “The Honourable”. Children of a Mom Luang or M.L. are surnamed according to their respective branch of the family, always followed by the noble suffix “na Ayudhya”.

Mom is also the title used by the wife of a prince who is not of royal birth.

Royal princes can receive a title ad personam analogous to the duchies created in Europe for the senior members of royal families. These titles are known as “Krom” titles and there are 6 ranks (from the highest to the lowest rank): Somdetch Krom Phraya (formerly Krom Somdetch Phra), Krom Phraya, Krom Phra, Krom Luang, Krom Khun, Krom Muen. A Krom title is usually followed by a place name and can be considered and translated as Prince of + place name, being a title of nobility with royal connections and territorial designations.

There was a legal system of nobility in the ancient Kingdom of Thailand.

A hierarchy of personal nobility titles was abolished and supressed on 15/5/1942, and restored back on 31/12/1944 but noble titles were no longer bestowed upon individuals.

List of Thai Nobility Titles by Grade and Rank:

The Thai Nobility Titles (in descending order of importance from the highest to the lowest rank) were: Chao Phraya, Phraya, Phra, Luang, Khun plus a new name or designation. Noble Titles were granted only to Mom Rajawongse or M.R., Mom Luang or M.L. (the lowest ranking titles in the Royal Family), and also to commoners and foreigners.