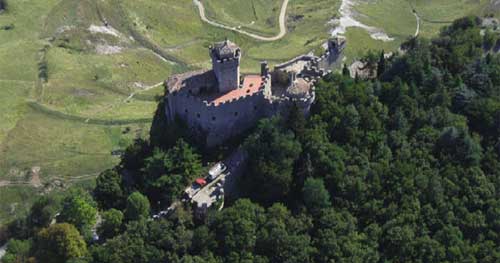 The nobility ranks of San Marino are based on the Italian model (with the exception of the titles of Prince and Viscount , which were never granted) and are as follows:

Duca, Duchessa. (Duke, Duchess). Resulting from the Latin dux, a military leader, this title originally was reserved to the sovereign of important territories. Like principalities, duchies are sometimes borne by peers whose early medieval families were barons, enfeoffed knights or other feudatories. Like princes, dukes were previously accorded the address “Your Excellency.” The younger son of a duke, and the heir before succession to the title, is a nobile dei duchi di (seat), namely a “noble of the dukes of” some place. Dukes and their consorts are most formally addressed verbally by title and territorial designation. The heraldic coronet of a duke is a jewelled circlet of gold surmounted by five visible strawberry leaves. Usually, the crimson tasselled cap is not rendered within the coronet.

Marchese, Marchesa. (Marquess, Marchioness). The term derives from the Old Italian marchio, referring to the man charged with guarding a march, or border territory, and the French marquis shares the same origin. The younger son of a marquess, and the heir before succession to the title, is a nobile dei marchesi di (seat), namely a “noble of the marquesses of” some place. Marquesses and their consorts are most formally addressed verbally by title and surname; since in Italy a woman usually continues to use her own father’s surname even after marriage, a marchesa may bear a surname other than her husband’s. The heraldic coronet of a marquess is a jewelled circlet of gold surmounted by three visible strawberry leaves, the central leaf flanked by two rows of three pearls each, supported by stems or set directly upon the rim.

Conte, Contessa. (Count, Countess). The word traces its origin from the Latin comes, for military companion. Comital territories were large in the eleventh century, but virtually indistinguishable from baronies by the fourteenth. For purposes of precedence, there is no contemporary distinction between a feudal count and a count palatine; the latter was usually a court officer who lacked a territorial designation attached to his title. It is noteworthy that conte is one of the few Italian titles sometimes, though rarely, inherited by all heirs male, depending on the terms set forth in the patent of creation. The younger son of a count, and the heir before succession to the title, is a nobile dei conti di (seat), namely a “noble of the counts of” some place. Counts and their consorts are most formally addressed verbally by title and surname. Counts palatine were created by certain sovereigns and by the Popes and usually bore no territorial designations attached to their surnames The heraldic coronet of a count is a jewelled circlet of gold surmounted by nine visible pearls, supported by stems or set directly upon the rim. 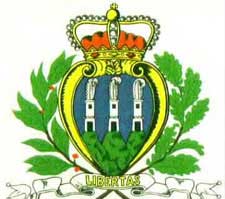 Barone, Baronessa. (Baron, Baroness). The title is probably of Germanic origin; the Latin root baro referred to a simpleton, but by the Middle Ages baronis was a title of nobility or, more often, a nobiliary rank employed in reference to holders of feudal property. Most seigneuries (see below) were eventually elevated to baronies. In the South, the most important medieval baronies were elevated to princedoms or dukedoms by the eighteenth century. Though often employed loosely in the remote past, the title barone was by 1800 established to be a creation or recognition resulting from royal prerogative, not an honorific privilege to be appropriated by any wealthy landholder. Heraldic regulation in the Kingdom of Italy further established that the sons of barons could no longer appropriate cavaliere as a courtesy title. Barone is the most frequent of the modern Italian peerage titles. The younger son of a baron, and the heir before succession to the title, is a nobile dei baroni di (seat), namely a noble of the barons of” some place. The standard heraldic coronet of a baron is a jewelled circlet of gold surmounted by seven pearls, supported by stems or placed directly upon the rim.

Patrizio (Patrician). The term obviously derives from that used to describe the aristocratic class of ancient Rome. A patrizio is said to be “of” a certain place, such as Venice or Florence, without it being his feudal seat, just as an American might be “of New York.” The rank is normally transmitted to heirs male general. According to legislation enacted by the Consulta Araldica, there is no feminine, but the daughter of a patrizio might be said to be dei patrizi [surname], namely “of the patricians [surname]. Patrizio is also the translation of Patrick; Patrizia is Patricia but is never used as a title. The crest coronet of a patrician is a simple jewelled circlet of gold.