The Best Castles in Europe for History Lovers

The castles of Europe each have their own unique and fascinating stories to tell. Some are fairytale legends of happy unions, or triumph over adversity. Some are complicated family sagas, full of intrigue, drama and scandal. While others reflect the cultural changes transpiring beyond their ancient walls.

The following is a selection of three of the best castles in Europe for history lovers – a combination of classical refinement, medieval magic and the rarely-told tales of history’s powerful females… 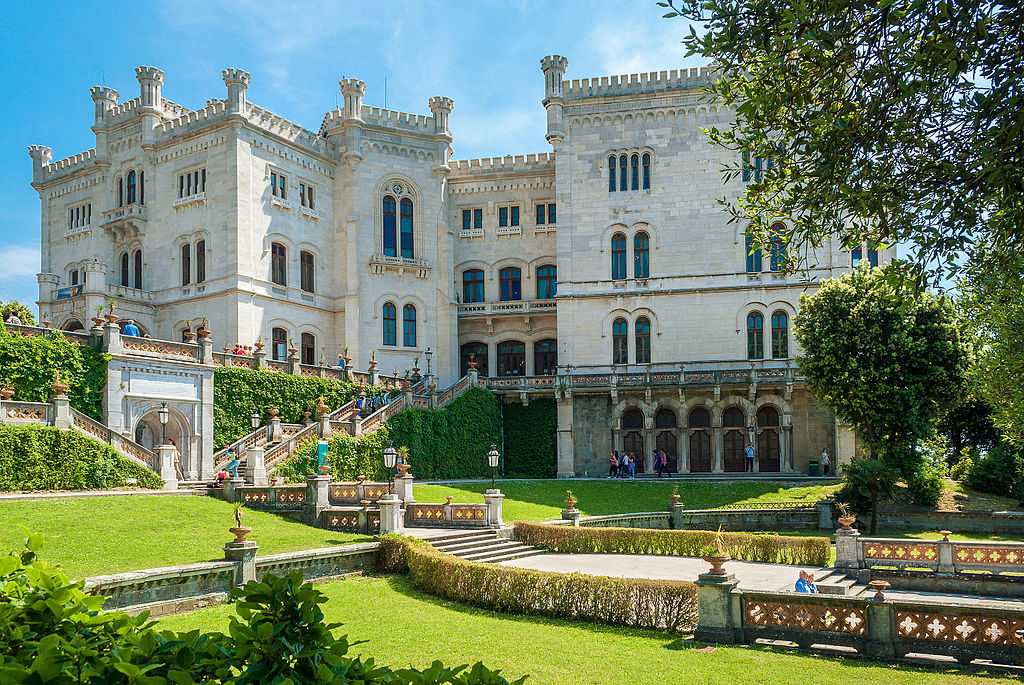 The Castello di Miramare is a relatively young European castle, built in the middle of the 19th century. As such, it stands as a finely preserved example of classical refinement, as well as the wealth and splendour of one of Europe’s most powerful sovereign families.

The castle is situated on the Italian shoreline, near Triest in northeastern Italy. However, it was originally built as a residence for the famous Austrian Hapsburg family. According to legend, Archduke Ferdinand Maximilian fell in love with the coastline and the sea views in the gulf, after being stranded there during a storm. He went on to purchase the area and commission the building of the castle and its park.

History lovers will enjoy this beautifully preserved example of the refinement and elegance that were the epitome of royal court life in the mid 19th century. Many of the rooms and chambers contain the original furnishings, portraiture and artefacts, there is even a throne room which has recently been restored to its former regal splendour.

With its ivory tower and picturesque coastal position, Miramare Castle provides a fascinating glimpse into the daily life of members of the House of Hapsburg, and the story of one of Italy’s most beautiful castles. 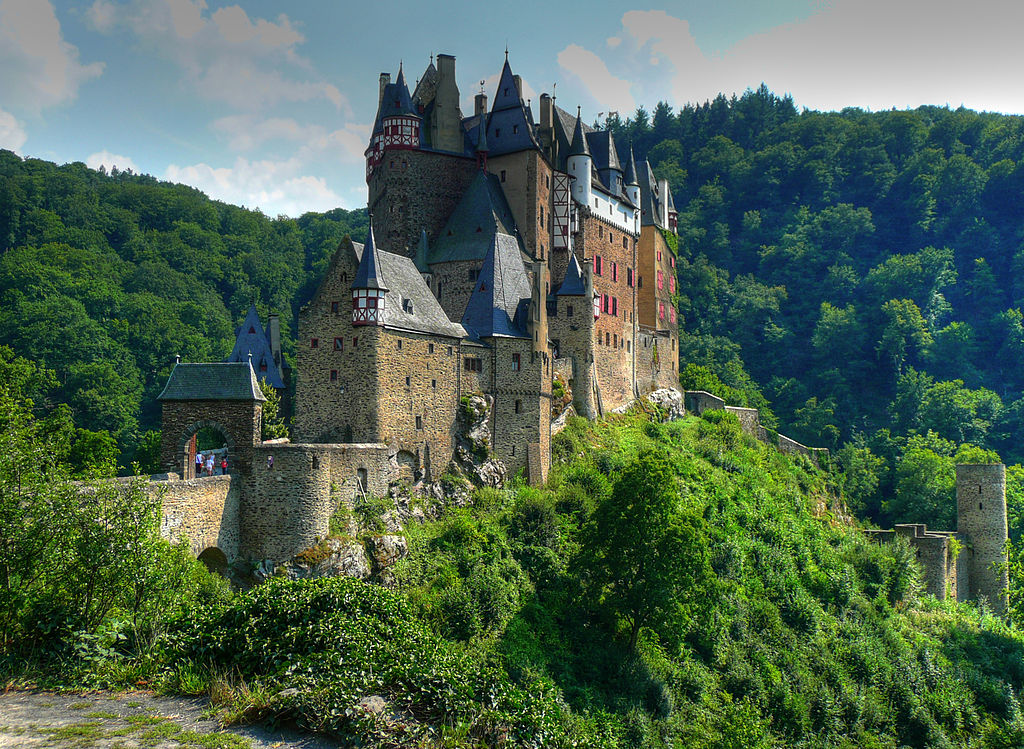 Georg Dehio, renowned historian and author of the Handbook of German Art History, described Eltz Castle as “the quintessential castle…the epitome of a castle”.

With its ornate oriels and eight magnificent towers, perched high above a hilltop forest, Burg Eltz is certainly typical of the fairy-tale architecture that Germany’s Rhineland is famous for. Yet this picture-perfect castle is rare among Europe’s historic buildings in a number of ways.

Eltz Castle has remained in the same family for its entire history – spanning eight centuries and 33 generations. From its medieval origins until the present day, it has been the ancestral home of the Eltz Family and is still owned and maintained by them today.

Aside from a brief siege during the 14th century, Eltz Castle has also enjoyed a relatively peaceful history, unscathed by the battles and wars that damaged or destroyed many of Europe’s historic buildings.

The castle of today tells the unbroken story of its construction and development over the last millennium, ever since its most ancient part, the Romanesque keep ‘Platteltz’, was built in the 9th century. Its history is revealed through its stunning architecture, charming inner courtyards, and beautifully presented interiors, many of which contain original furnishings, artefacts and treasures.

Nestled into the breathtaking Eltz Forest natural reserve, overlooking the banks of the River Moselle, Eltz Castle is a rare opportunity to travel back in time and explore the history and magic of a medieval castle. 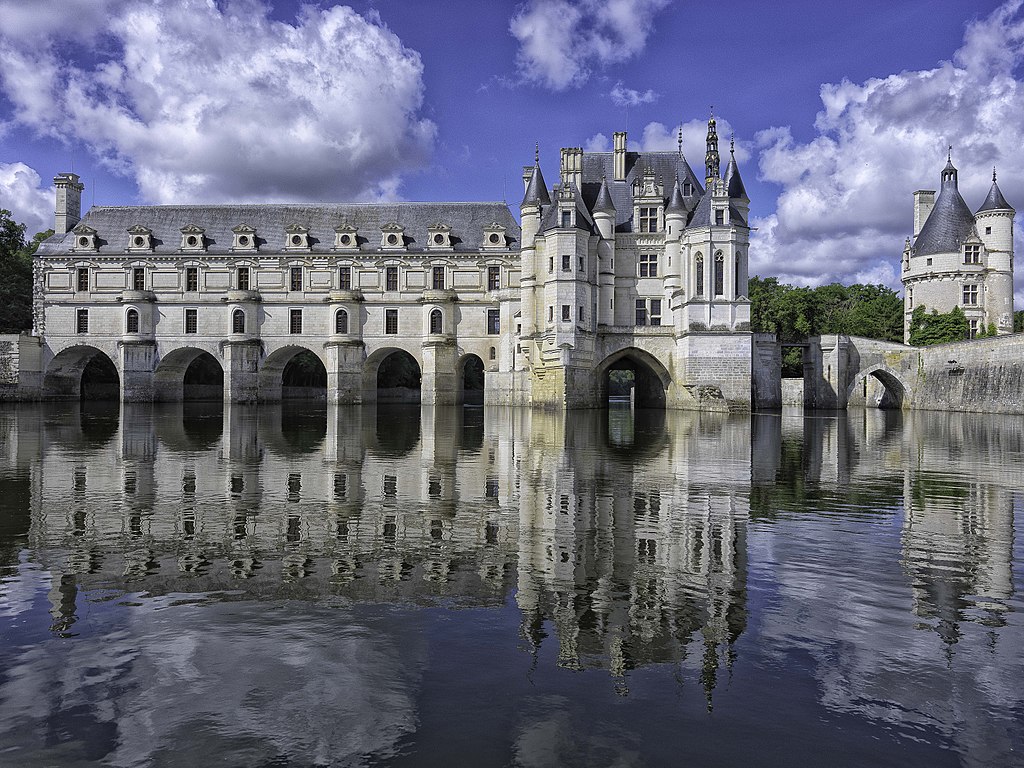 Constructed as the Gothic period evolved into the Renaissance, Château de Chenonceau is a beautiful blend of the two architectural styles. Its history is an intriguing tale of sedition and indebtedness, fire and punishment, demolition and restoration, royal visits, noble triumphs and marital heartbreak.

Rare among medieval history, the story of Château de Chenonceau is largely the story of women. One of the earliest chatelaines was Catherine Briçonnet, the wife of a wealthy noble who bought the castle only to demolish it and then rebuild. Catherine oversaw the restoration of the château’s new incarnation as a noble residence in the early 16th century.

In 1535, the castle became the property of the French Crown, in lieu of unpaid debts. The King then gifted it to his favourite mistress, Diane de Poitiers, who oversaw more extensive developments, including the gardens and the arched bridge traversing the Loire River.

Although Diane de Poitiers ultimately gained official ownership of the château in 1555, it was soon taken over by another powerful female, King Henry II’s widow, Catherine de’ Medici. Queen Catherine also developed the castle and gardens and held the first French fireworks display at one of her spectacular parties.

The next chatelaine was Louise de Lorraine, who spent much of her time there in a period of depression and mourning over her husband’s death. The castle was then gifted to another royal Mistress, Gabrielle d’Estrees, obtained once more in lieu of debts, before being bought and sold and arriving in the hands of its 18th-century chatelaine, Louise Dupin. Louise’s legacy was of a more cultural nature, as she hosted literary salons and leaders of the Enlightenment, as well as saving the château from destruction during the Revolution.

The last of the château’s legendary ladies, Marguerite Pelouze, acquired the property in 1864, once again renovating grandly, to the point of financial ruin.

Currently owned by the Menier family, the castle continues is evolution and fascinating narrative, being once again restored and reinvented. It’s little wonder that the Château de Chenonceau is one of France’s most popular and much-loved castles, second only to the Royal Palace of Versailles.

The castles of Europes spanned many centuries and turbulent times, and as a result, many of the lives that were lived within their ancient walls have been lost to history. Luckily, though, some of their stories survived, passed down through families, legends and precious documentation.

These castles and their vibrant histories provide fascinating insights into European life over the last thousand years, virtual time capsules that endured the ages and now serve to delight modern history lovers everywhere.

You might not be able to purchase any of these beautiful castles, but if they have piqued your interest in acquiring your own prestigious Noble Title get in touch using the enquiry form in the sidebar or you can contact our Geneva office directly between 10.00-19.00, Monday to Friday on +41 225 181 360.