The Greatest Royal Battles In History

The lives of kings and queens and their royal courts is often depicted as a decadent whirl of social delights and extravagant opulence. The lavish lifestyles of many royals and nobles throughout the ages have been a vision of grand palaces, exquisite finery, days of leisure and refinement, and evenings of feasting and merrymaking.

It can be easy to imagine that being a king or queen or member of a royal family is an enviable lifestyle, one of freedom, power and vast amounts of wealth. Yet throughout the ages, the role of royalty has also carried with it a degree of danger and a heavy burden of responsibility.

The sovereigns and rulers of nations had more to do than enjoying their status and wealth, they were often active statesmen and women, leaders of their nations and commanders of great armies that fought in their name.

While many great kings and queens led their troops to victory from a safe distance, some royals were more closely involved in military action. Particularly in the earliest times of the medieval period, valiant kings would be leading the charge of battle, not merely directing from the front line, but fighting alongside their men, shoulder to shoulder with their devoted troops.

These brave warrior kings and princes would often leave their mark on history as legendary military leaders, or in the cases when the winds of battle didn’t favor them, tragic tales of regal heroism.

The presence of a royal leader on any battlefield would elevate both the importance and the historic aspects of both the battle and the outcome. Like many important battles, kingdoms may have hung in the balance, but royal battles included an element of sovereignty and majesty.

Over the course of a single battle, royal reputations could be ruined forever, or cemented in the annals of history. The stakes of royal military action were much higher than those fought without a sovereign leading the charge.

Here are two of the greatest royal battles ever recorded throughout history, along with the courageous sovereigns who forever tethered their names to valiant victory, or military misadventure.

The Battle Of Hastings

Norman knights and archers at the Battle of Hastings, as depicted in the Bayeux Tapestry – Myrabella, Public domain, via Wikimedia Commons

Perhaps the most famous example of a king active in the heat of battle is the legend of King Harold, the English ruler who was defeated during the Battle of Hastings.

One detail that distinguishes this great royal battle from many of the other historic wars fought on behalf of kings and queens, and that is the fact that King Harold was present on the battlefield, and not merely to direct the action, but he was actively fighting alongside his men.

The reason history is so clear on this fact is that King Harold was killed during the battle, famously and heroically dying in the name of his cause and the defense of his kingdom.

The legend has it that King Harold was killed by an arrow wound to the eye – a legend supported by the famous Bayeux Tapestry that depicts the tragic king in full armor in the midst of battle gripping the arrow that has pierced the visor of his helmet. The Latin caption surrounding the infamous battle-scene reads, Harold Rex Interfectus Est, which translates as King Harold is killed.

In the era of the great Battle of Hastings which took place in 1066, it was a common sentiment to believe there was no greater honor than to die for one’s country. So while King Harold may have lost his life, and subsequently the battle and his kingdom, his place as a brave warrior king would be established for all time.

The king who took the place of Harold on the English throne, ushering in the Norman period of Great Britain, may have achieved the legendary moniker of William the Conqueror, along with the spoils of victory. Yet his legend would not surpass that of the infamous King Harold as one of the most infamous warrior kings.

The Battle Of The Spanish Armada 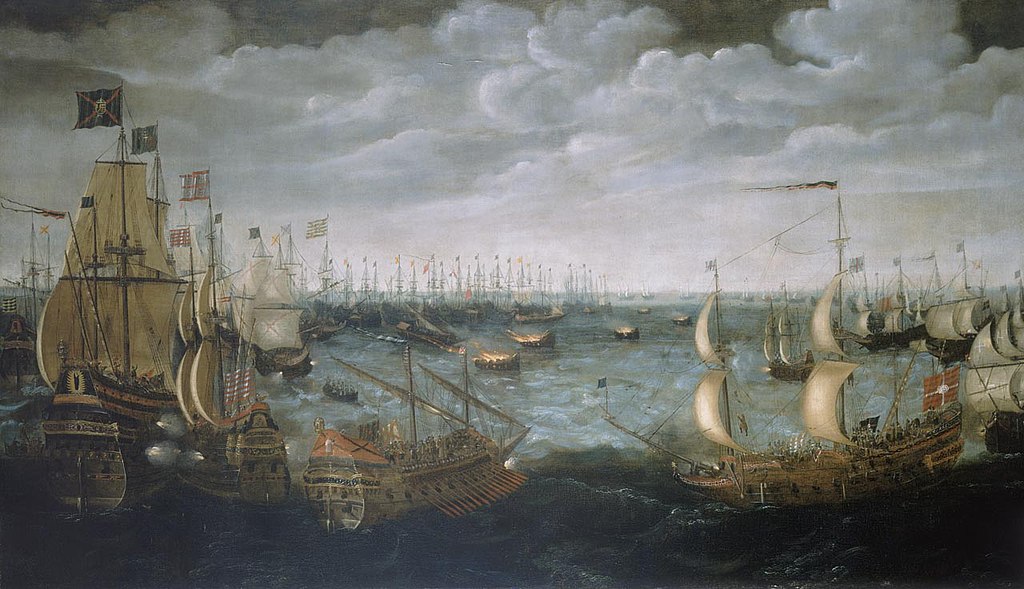 While it was not uncommon for medieval kings to be present on the fields of battle, it was much more rare for female royals to be anywhere close to the action. The courageous English queen, Elizabeth I, was one of a small number of women who cultivated a legacy of bravery and courage in the face of mighty military forces.

The Battle of the Spanish Armada saw the powerful Spanish forces attempt to invade the English shores in 1588. The odds were undoubtedly in the favor of the Spanish navy, whose military might was known throughout the world. Perhaps the decisions behind the invasion were influence by the fact that a woman held the English throne, her gender suggesting that the fairer sex may not be as significant a military power as a king or male ruler.

Whatever the story behind the invasion of the Spanish Armada, history reveals that England and its female sovereign were greatly underestimated, as the result of battle would forever be depicted in the centuries that followed as an astounding victory against the odds.

Queen Elizabeth’s courage in the face of the Spanish forces has become legendary. Though the queen herself was unlikely to have been involved in any physical warfare, it is the caliber of her nerve and strength of resolve that sustains her legend as a formidable warrior queen.

While she may not have experienced the conflict firsthand, her presence on the battlegrounds has become a historic portrait of the quality of her mettle in the face of battle. The brave English queen was universally lauded for her rousing speech to her troops during the darkest moments of the impending invasion, credited with inspiring her men to the legendary victory.

England’s defeat of the great Spanish Armada is undoubtedly one of the greatest royal battles of European history, and it secured England’s place in the world as a military force to be reckoned with, as well as securing Queen Elizabeth in her legend as the female sovereign with the heart of a lion.

The nations and monarchies that evolved over the medieval periods were frought with royal battles and regal conflicts. There may have been other occasions when the kings and queens played a key role in the battles themselves or the moment outcomes, yet these details may have been lost to history.

Thankfully, the stories of King Harold and Queen Elizabeth have survived the ages, providing valuable insights into the role of kings and queens on the battlefields of history, and their personal roles in the greatest royal battles.

If learning about these royal battles has piqued your interest about acquiring a prestigious Noble Title of your own get in touch using the enquiry form in the sidebar or you can contact our Geneva office directly between 10.00-19.00, Monday to Friday on +41 225 181 360.