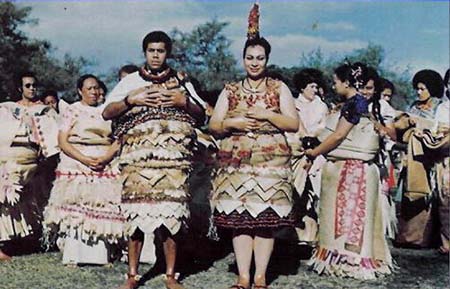 There is worldwide fascination with the tiny nobility of this very small and colourful country of the South Seas, the exotic and still relevant nobility of Tonga.

The Tongan nobility is an aristocratic social class, with a very restricted entry and a mainly hereditary nature, situated geographically in the Kingdom of Tonga, a Polynesian Country in the Pacific Ocean. The Nobility of Tonga is the consequence of a long history of social stratification and caste division, and also by the peculiarities of the union of the kingdom in the nineteenth century. It would be also necessary to point up the influence of the British System in the creation and style of the New Tongan Nobility.

Distinctive Features of the Nobility in the Kingdom of Tonga:

1. The Tongan Nobility has been regulated by a Constitution for more than 150 years, way ahead of many countries, including some European Countries.

2. Holders of Law Positions are usually promoted to the highest and most elevated titles of nobility.

3. The Nobility of Tonga still retains a great deal of political power.

4. Legislation is still influenced by the Nobility, as peers have a predetermined number of seats in the Royal Assembly of the Kingdom of Tonga.

5. Political Feudalism is still a fact in Tonga

Women Rights in the Nobility of Tonga:

Women of the Nobility can be appointed Queens of Tonga, and be Heads of State. Only Noble women belonging to the Tongan Royal Family can exercise this power and have this option to become royalty.

For the minor nobility, males are preferred, due to military and political implications, but females have never been legally excluded, which is very advanced.

History and Origins of the Tongan Nobility:

Tonga had been ruled since time immemorial by tribal -ethnic chieftains who could exercise a nearly absolute power, based on ancient customs and traditions. In the first half of the XIX century, the Tongan Islands were integrated into a single political and territorial entity, through treaties and military invasions, under the leadership of the powerful Prince Taufa Ahau. This traditional ruler publicly abandoned his old religious beliefs and converted to Christianity and adopted the name and style of King George Tupou I.

The newly proclaimed monarch consolidated his power, and proclaimed a “Decree of Liberation”, ending “Feudal Servitude” in the Islands, and significantly decreasing the legal rights of the Tribal Chiefs on their subjects. In 1870, he asked the English-Australian minister and preacher S. Baker, who had become his confidential adviser, to engage legal advice to prepare a constitution for the new kingdom, which he proclaimed himself as monarch. With the help of Sir Henry Parkes, the Governor of New South Wales, in Australia, S. Baker drafted a constitution that was presented to the King. The King approved the text, and submitted it to his Parliament, which ratified it on the days 4th and 5th of 1875, month of November, in the last legislative session of the year. Tonga was now a Constitutional Monarchy, which is by the way the oldest Constitutional System still in force in a country in Polynesia and the South Seas.

The Constitutional Recognition of the Nobility of Tonga

The Constitution oversaw the formal and legal recognition and creation of a Tongan nobility. The nobility consisted then of twenty chieftains who were also peers of the Kingdom and members of the Tongan Parliament by the king’s nomination. These peers were the holders of a hereditary title of nobility. There were nine nobles named among the territorial leaders of Tongatapu, five from Ha’apai, four from Vava’u, one from Niuafo’ou and one from Niuatoputapu. The king could not dismiss these nobles from their legislative function, except in cases of treason, or appoint additional nobles to the assembly, except at the request of the people. The twenty nobles sat in the Assembly, along with twenty common-law members of parliament elected by universal suffrage exercised only and exclusively by males.

The Tongan titles of nobility were now hereditary, following a very easy to implement principle of male primogeniture. This principle instituted an important change of ancient traditional practices. The custom was that the titles of the chiefs were given by the chiefs themselves at the time of death, to one of the pretenders to the leadership. Since this custom had generated wars in the past, the King hoped to guarantee stability by introducing hereditary bylaws. The titles of the chiefs who were not associated with the new titles of nobility were not abolished, but their prestige and authority were now less than those of the nobles. From a legal point of view, their rank was not anymore dissimilar from that of commoners. In addition, the new titles of nobility were associated with land titles. All land in the kingdom was the property of the king, who granted land to twenty nobles. So, the Chiefs lost their elective leadership and became hereditary members of the Nobility of Tonga.

Composition of the Tongan Nobility:

It is indeed very interesting the sociological implications of the Nobility of Tonga. Some of these first twenty nobles were very prominent chiefs by birth, with close family ties to the Tonga Dynasty and Royal Family, the first grand dynasty of Tongan supreme rulers, dating back to the ninth century. The other part of the Nobility were lower-ranking chiefs that had control and command of a large population, whose help in government the king had to reward.

As time goes by, the quantity of hereditary titles of nobility was increased to thirty-three in this day and age. His majesty George Tupou I appointed ten additional nobles the 24th of February of 1881, while his successor George Tupou II designated two more, and King Salote Tupou III granted nobility to another person. In response to this growth, a constitutional revision the 16th of December of 1914, confirmed by an Edict sanctioned by King and Parliament the 13th of July of 1915, stipulated that the members of the Tongan Nobility could not anymore enjoy the privilege of a hereditary seat in the national Assembly. They would have to elect up to 7 members of the nobility to represent them. The number of MPs elected by the people was therefore also decreased to 7. Currently, the 33 nobles elect nine of their peers to represent them in the National and Royal Assembly, in conjunction with 17 representatives of the people elected by universal suffrage.

The 12th of July of 2008, His Majesty the King George Tupou V introduced the entirely new precedent of creating non-hereditary titles of nobility, granted to members of the commonality, Tongans or sometimes even to foreign people, in exchange of services rendered to the country. The Tongan Monarch has this privilege under Article 44 of the Constitution, which allows the king to confer honorary titles. These new nobles can vote among the nobles during the legislative elections and (since 201712) can be elected deputies representing the nobility. No land is associated with these titles of the non-hereditary nobility of Tonga.

Privileges of the Nobility of Tonga

The territory of the kingdom is divided electoral districts headed by noblemen. Each Tongan nobleman receives a parcel of land from the nobleman on whose land he lives. As the grand chief of a territory grouping together several villages, each nobleman must be concerned about the well-being of commoners under his responsibility. It is his duty to answer their questions and know their expectations. A noble presides over monthly meetings in his electoral district, receives reports of village activities, endorses projects and manages the resolution of disputes and problems, acting as an arbiter. The high degree of respect of the people for the nobility is particularly manifest in the language, with the use of terms and expressions specifically used by a commoner addressing a member of the nobility.

Titles of Nobility in the Kingdom of Tonga

The Tongan Nobility uses the titles with the noble ranks of Lord and Baron, mainly Lordships, both life and hereditary.

The holders of the 33 hereditary peerages of the Tongan Nobility are known as Lords, in a rampant imitation of the British Honours System. There are 11 Royal Peerages currently held by members of the Royal Family. Three titles are vacant, and two people hold two titles at the same time.

When a title becomes vacant, following the death of a noble without legitimate descent, the title reverts to the Crown, which gets the title reassigned, typically to another member of the family of the deceased titleholder. A title can nevertheless remain vacant for several years.

The Title of Baron in the Tongan Nobility:

It is possible for a lord to be promoted to the higher rank of Baron. Currently, only one lord has the title of Baron, Lord Fielakepa, to whom the king granted this noble title on the 7th of February of 2008, on the occasion of his appointment to the Privy Council as a Law Lord. The first noble to obtain the title of baron was Alipate Tupou, for whom King Tupou IV created the title the 9th of June 1970, with the designation and name of Baron Vaea, and raising it to a rank of pre-eminence superior to that of all other nobles with the exception of members of the royal family.

Nobility of Tonga and Electoral Districts:

The territories connected with the thirty-three titles of nobility are divided into electoral districts, corresponding to the groups of islands forming the country. The nobles elect their representatives among their peers in their constituency. In the years previous to 2010, nobles could vote and be voted in several constituencies. An amendment to the electoral law, applicable from the legislative elections of November 2010, instructs that each noble may be registered only in a constituency, where he exercises his right to vote and from which he can be elected as a Member of Parliament. At present, 14 titles of the hereditary nobility are associated with the joint constituency of Tongatapu, with the capacity of electing 3 MPs. A number of 8 peers are associated to the Vava’u district, electing two seats for parliament. 7 Peers are linked to Ha’apai, electing two Parliamentary representatives, and 4 to the united Niuatoputapu and Niuafo’ou electorate, electing only a MP.

The titles of non-hereditary nobility are relatively new in Tonga, as the first one was granted by Royal Decree by letters patent drafted and approved in 2008. Their holders and possessors are officially known as Life Peers, a technical word clearly copied from the British nobility. The first titleholder to obtain this dignity, given in the month of July of the year of our Lord of 2008 by King George Tupou V, were Tevita Poasi Tupou, a Judge and Minister of Justice, and Ramsay Robertson, a foreign Judge, who was British Member of the Highest Court of Tonga, as well as Taniela Tufui, another Magistrate and member of the Tongan Civil Service. In addition, all three were appointed, together with Lord Fielakepa, hereditary peer, under the category of Law Lords. As such, they would be the first four members of the newly formed Judicial Committee of the Royal Privy Council, advising the King of Tonga in the exercise of his judicial powers. It is evident that many political powers are still exercised by the very powerful nobility of Tonga.