The Title of Prince in France 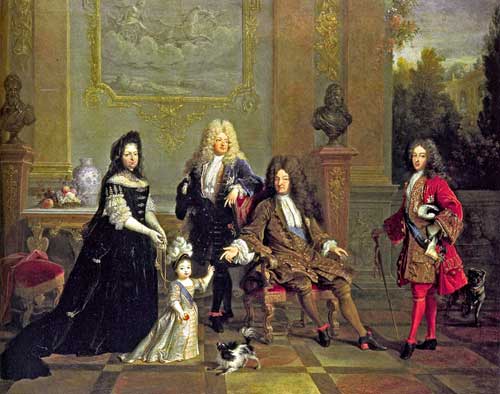 The title of Prince was not formally recognised in the grading of non-royal French titles that start with the title of Duke: the monarchy accepted only the royal Princes and the foreign Princes.

The title of Prince is borne by all the members of the different Royal Families of France, in the three dynastic lines of Bourbon-Anjou, Orleans and Bonaparte.

A number of titles of Prince were created in the Holy Roman Empire in provinces and geographical regions that were later reunified with France, both for noble families and for ecclesiastical bishoprics. Other titles find their origin in the local history. Also, the Empire created several princely titles, most of them were abdicated at the fall of Napoleon. A few foreign titles have been recognized in the past in France.

This list excludes the ecclesiastical princes and the also the ones who were members of the different French royal families, focusing exclusively in the non-royal and non-ecclesiastic princely nobility.

Arenberg (Prince and Duke of, with treatment of HSH, Serene Highness): the title was granted in the Holy Roman Empire in 1576, recognized in France in 1827 and is borne by the noble offspring of the family.

Assier: it is held by the ducal family of Uzès

Bauffremont:(Prince-Duke of): also Prince of Marnay in the Holy Roman Empire in 1757, formally acknowledged by King Louis XIV as Prince of Bauffremont the same year;

Bethune Hesdigneul: the title was granted in 1781 in times of the Holy Roman Empire, authorized in France in 1782 and recognized in Belgium in 1932.

Blacas: Duke of Blacas in France in 1821, recognised as Prince by the Austrian Empire in 1837 and 1838, being a title only transmitted by primogeniture.

Broglie: the title of Prince was awarded in 1759 in the Holy Roman Empire, authorized in France in 1818 and is used today by the descendants.

Chalais: a title acquired and inherited by the alliance in marriage in 1873 between Gaston de Galard de Brassac de Bearn and Cécile de Talleyrand Perigord, 15th Princess of Chalais; the title of Prince of Chalais had formal permission to be used in Spain in 1883 and 1904; this title of Prince of Bearn and Chalais is still in the hands of the head of the family.

Château Porcien: a principality in the House of Croÿ since 1551, hereditary through the Mazarin and Richelieu family lines and in the property of HSH Albert, The Current and Sovereign Prince of Monaco.

Chimay and Caraman: Duke of Caraman in France in 1828, Prince of Chimay as heir of the House of Henin Liétard in the Netherlands in 1817 and 1824, also Prince of Caraman in Belgium in 1856 (male primogeniture) and in 1867 (all male descendants).

Courtenay: a title in use since 1712 by the House of Bauffremont by their marriage with Helene, Princess of Courtenay of the Capetian branch from King Louis VI of France and still held by the Family.

Croÿ: Prince of the Holy Roman Empire in 1486 and 1510, Duke of Croÿ in 1598 in the Low Countries and 1768 in France: treatment of Prince and Princess and Serene Highness in France, Belgium and Germany.

Essling: a Napoleonic princely title granted in 1810 for military merits and victorious deeds in the field of battle, and confirmed in 1819 to General-Marshall André Massena, borne today by the descendants and family of the Duke of Rivoli.

Gueménée: a principality erected in 1547 for Louis de Rohan, Count of Montbazon: the title is owned by HSH the Prince of Rohan in Salzburg, Austria.

Léon: a princely title passed to the Chabot family, today named Rohan Chabot, by the marriage in 1645 of Henri Chabot, Seignior of St Aulaye with Marguerite de Rohan, heiress of the Dukes of Rohan and Princes of Leon: the title is today in the family of the Dukes of Rohan.

Listenois: patrimonial property of the Princes and Dukes of Bauffremont.

Marnay: prince title of the Holy Roman Empire, created in 1757, recognized by King Louis XIV as Prince of Bauffremont the same year and still borne today by the Prince-Duke of Bauffremont.

Montauban: a title used by the Rohan family, and still in use at the present time.

Montcornet: princely title acquired by the Duke of Mazarin in 1666, transmitted through the Mazarin and Richelieu families and belonging today to HSH Albert, The Sovereign and reigning Prince of Monaco today.

Murat: the famous brother in law of the French Emperor Napoleon I, Joachim Murat was very rapidly granted the title of Prince in Sovereign Prince of Pontecorvo in 1812. The family was confirmed as Prince for all descendants and the treatment of highness also reconfirmed in 1853. Also, Murat was awarded in 1805 the royal title of Grand Duke of Cleves and Berg in 1806, appointed King of Naples from 1808 until 1815.

Polignac: the head of this legendary noble family is the Duke of Polignac since 1780 and 1783 and the members of the primogenital branch of the family were created Prince and Princess in 1820 by the Pope, a title recognized in France in 1822 and in the Kingdom of Bavaria in 1838.

Poniatowski: the title of Prince was created in Austria in 1850 for the genealogical descendants of King Stanislas II Poniatowski of Poland.

Robech: a Spanish princely title created in 1630 for a member of the Montmorency, inherited by the Cossé Brissac and transferred to a younger branch of the Dukes of Levis Mirepoix by the marriage of Marie de Cossé.

Rochefort: a title granted in 1728 and still borne by HSH Prince Rohan in Salzburg, Austria;

Soubise: a title awarded in 1667 and in the property of one of the branches of the Rohan family.

Tonnay-Charente: a principality belonging to the Princes of Mauleon, inherited by marriage in 1254 by the Rochechouart noble family, later created Dukes of Mortemart: still in use today by the descendants of the Duke of Mortemart.