Portugal and the Portuguese Nobility 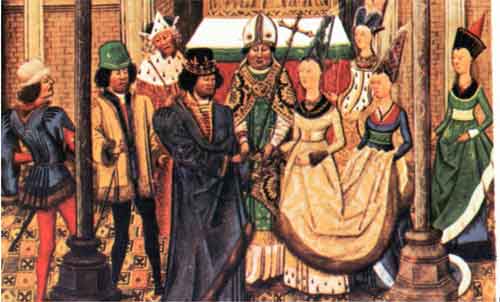 The Nobility of Portugal consists of Dukes, Marquesses, Counts, Viscounts, and Barons: the first three titles carry with them the rank of Grandee of the Kingdom, but Viscounts and Barons are only Grandees if specially created as such.

In older times, the only title was that of Rico Homem, which means powerful and great. This celebrated dignity is first heard of in Spain in the times of the Gothic Kings, and at first seems to have been used to designate the members of the Royal House, but was afterwards extended to those who distinguished themselves in war.

From the Gothic Kings it passed down to the Kings of Portugal, XCastile, and Aragon. They ranked next to the King, and had so many prerogatives that the kings did not take any action without first consulting them. The dignity was conferred with great ceremony, the grantee being invested with a banner and a kettle.

The banner indicated their authority to raise soldiers on their lands, and the kettle their ability to keep them. Among them, some were distinguished as Rico Homens de Sangue, but they all equally enjoyed the privilege of Grandeeship, which consisted of remaining covered, and of sitting in the presence of the King. It also became the custom for the wives to assume the dignity of their husbands, and to be designated Ricas Donas, and for daughters in the absence of sons to succeed to the title of Rica Dona.

There was also another dignity, that of infançao, but whether higher or inferior to Rico Homem is a disputed point. Some writers consider the dignity so high, as only to belong to the grandchildren of the king. That is, to the children of the infantes. However, as there are instances of the dignity of Rico Homem being conferred on Infançoes, this seems improbable, and it seems and it seems possible that it was a title borne by the second sons of the Ricos Homens.

The title of Rico Homem disappears after the reign of Alphonso V. The last recorded creation is that of Nuno Martins de Sylveira, Escrivao da Puridade and Coudel Mor to that King 1 July 1451. Alphonso and his immediate successors endeavoured to bring the nobility more under their power by appointing them officers of the Royal Household, and accordingly divided the Nobility into two orders, each consisting of three degrees. The first order consisted of Moço Fidalgos, Fidalgos Escudeiros, and Fidalgos Cavaleiros. The second order was made of Escudeiros Fidalgos, Moços da Camara, and Cavaleiros Fidalgos. A small pension was attached to each.

Of the modern titles of nobility, that of Count was for a long time the only one known in Portugal, and it first occurs in 1298(1336 era). King Denis, by a charter dated at Santarem the 8th of May of that year conferred the dignity with the County of Barcelos on Dom Alfonso Sanches. The connection of King John I with the Crown of England led him to imitate Edward III, and he conferred the title of Duke on his sons, the infantes Dom Pedro and Dom Enriques, creating the first Duke of Coimbra and the second of Viseu in the year 1415, in commemoration of the glorious expedition to Ceuta.

His Grandson, King Alphonso V, created his uncle, the Senhor Dom Alfonso, Duke of Braganza the 30 December 1442 , and his brother, the Infante Dom Fernando, Duke of Beja in 1452.

The title of Marquess first occurs in 1451, in which year the same king conferred the title of Marquess of Valentia on the son and heir apparent of the Duke of Braganza. All these titles carry with them the right of grandee, and the sons and daughters of Dukes by Charter of Alphonso V had the same rank attached, which was also conferred by him on the Grand Priors of the Crato of the Order of Malta, and on the Archbishops and Bishops of the kingdom and colonies (das conquistas), as also on the titular Bishops without dioceses who were appointed by the king. King John V, by a decree of 17 February 1717, conceded the Patriarch of Lisbon the same honour and prerogatives, which were also conceded to the cardinals.

Titles of Nobility in Portugal were never hereditary in the same sense as England or Spain. They were many times conferred for life only, though some were occasionally granted for two or three lives, but each successor, even in the cases of those titles originally granted de jure, has to obtain verification before he can take up the title, much in the same manner that an English peer has to obtain his writ of summons before taking his seat in the house of Lords.

Formerly all titles carried with them a grant from the royal treasury called Assintamentos, and this made the kings very careful in conferring titles, and doubtlessly accounts for the very small number created by the early sovereigns. The total number of creations up to June 1890 appears to have been 1268, of which number nearly two thirds, 805, were conferred by Queen Mary II and her son, the late King Louis; 573 titles of nobility were still existing at that date; 112 were merged in, or united with, other titles; and 583 were extinct.

The sons and daughters of Portuguese Nobles have no title, except that of Dom or Dona, before their Christian names, but this designation, like that of Esquire in England, has long since lost its former significance.

The question of Precedence was first regulated by the Cortes, which assembled at Coimbra in 1472, when it was settled according to the relationship of each noble to the King. Those related through males would take precedence of those through females. Under John III, however, it was settled in 1556 that all precedence should be according to the antiquity of the title alone; but Alphonso VI enacted that those nobles to whom the King gave the honour of Relationship (Honra de Parentes), should have a decree (Alvará), granting them special precedence.

In the Old Cortes, the Nobles sat with the clergy and the representatives of the cities, but the constitutional charter of 29th April 1826, granted by Peter IV, provided for a hereditary house of Peers, of whom the first members were to be nominated by the King. The dignity of a Peer of the Realm was not, however, as in England, attached to a title, but was a separate dignity, and was not necessarily conferred on the holder of one.