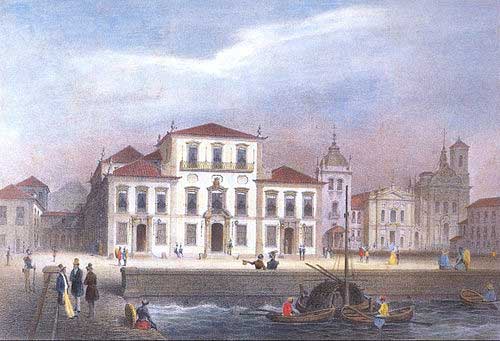 His Majesty the King Dom Joao VI, creator of the Brazilian Nobility, reigned in Brazil 1815-1822) and was the first ever to grant nobility titles: as sometimes in Portugal, the Brazilin noble titles were mostly life titles and were very seldom renewed or confirmed in favour of the next generation. Titles were granted with or without grandeeship, in Spanish fashion (both the Spanish and Portuguese used the system of grandees).

The Brazilian Nobility organised the ranks and grades of their noble titles in the following categories: prince (reserved exclusively to the Imperial Family only), 3 titles of duke awarded to High-ranking military commanders and to two of the at least three illegitimate daughters of Emperor Dom Pedro I, followed by the more usual titles of marquis, count, viscount and baron.

In 1890, the Republic abolished all nobility titles and imperial Orders, with some limited effects. The title of prince is still recognized to the members of the Imperial House of Orleans and Bragança.

There may be some omissions in the list, as this is a tentative listing, non-exhaustive. However, most of the noble titles and the main creations of the Brazilian nobility are mentioned.

Duchess of Ceara with the style of Highness: Dona Maria Isabel, younger illegitimate daughter of Emperor Dom Pedro I by Domitila de Castro Canto and Mello, Marchioness of Santos and Viscountess of Castro, also styled Baroness of Canto and Mello.

Viscount and later Marquis of Abrantes: to Miguel de Abrantes, a Foreign Minister of the Empire

Marquis of Aguiar: the Marchioness was Grand Mistress of the House of the Empress circa 1848

Marquis of Cantagallo: Captain of the Archers Company of the Imperial Guard. His wife used to be Grand Mistress of the House of the Empress.

Viscount then Marquis of Inhambupe: Secretary of State, his wife was rumoured to be an occasional mistress of Emperor Dom Pedro I

Marchioness of Maceyo: Grand Mistress of the House of the Empress around 1848

Marchioness of Maranhao: Lady in waiting under Empress Leopoldina

Marquis of Monte Paschoval: Archbishop of Bahia, Metropolitan and Primate of Brazil

Viscount then Marquis of Olinda: Pedro de Araujo Lima, Regent in the 1840 -1841 period.

Viscount then Marquis of Paranagua: A Brazilian Admiral who was Secretary of the Brazilian Imperial Navy.

Marquis of Rezende: Grand Master of the House of the Empress, appointed Ambassador to Portugal in Lisbon

Marquis of San Joao Marcos: Minister of Justice and President of a High Court

Marquis of Sao Vicente: A Senator and Member of Parliament and different assemblies.

Count of Arcos: Viceroy and Governor of the Fluminense Province

Count of Baependy: Vice President of the Senate, as well as Minister of the Interior

Count of Barca: Minister of War at the time of King Dom Joao VI

Countess of Barral: Lady of Honour of Empress Dona Teresa

Count of Conceicao: For the most Illustrious Dom Viçoso, Bishop of Marianna (nowadays Minas Gerais)

Count of Parati: First Lord Chamberlain of the Court, he was born with the surname Lobato, and was the brother of the Baron of Vila Nova da Rainha and of the Viscount of Mage

Count of Ponte: Governor of Brazil for Portugal

Count of San Agostino: The Bishop of Olinda

Count of Sao Jose (1817): Colonel Dom Fernando de Carneiro Leao, President of the Bank of Brazil, husband of Gertrudes Carneiro, who was allegedly murdered on instructions of Queen Carlotta, who was the lover of her husband. Emperor Don Pedro is rumoured to have destroyed the proofs and confined the queen to an isolated residence.

Viscount of Araxa: President of the Senate

Viscount of Camaragibe: Vice President of the Senate and Director of the Faculty of Law, Jurisprudence and Social Sciences.

Viscount of Caravellas: Foreign Minister around 1871

Viscount of Itabaiana: Ambassador to the Kingdom of Spain in Madrid

Viscount of Mage: born Lobato, brother of the Baron de Vila Nova da Rainha and of the Count of Parati

Viscount of Maracaju: Lieutenant General, also President of the Province of Amazon

Viscount of Parahyba: President of the Province of Sao Paulo

Viscount of Parna: President of the Council of Ministers and Foreign Minister (1853)

Viscount of Prados: President of the Chamber of Deputies

Viscount of Rio Banco: President of the Council of Ministers and Minister of Finance

Viscount of Rio Seco: the Viscountess was Lady of Honour to Empress Leopoldina

Viscount of Sabara: President of the Supreme Court of Justice

Viscount of Serro Frio: President of the Senate

Baron later Viscount of Tamandare: Admiral, as well as Vice President of the Supreme Court of Justice and Aide De Camp to the Emperor

Baron of Cabo Frio: Vice secretary of the Foreign Ministry

Baron of Cahy: President of the Tribunal of Commerce of San Pedro do Sul and Bahia

Baron of Guimaraes: Director General of the Ministry of Public Works, Trade and Agriculture

Baron of Ibiapada: President of the Tribunal of Commerce of Ceara

Baron of Itapoan: Director of the Faculty of Medicine and Pharmacy Schools in Bahia

Baron of Lages: Minister of War

Baron of Lucena: President of the Chamber of Deputies

Baron of Paranapia Cabo: Councillor of the Tribunal of the National Treasury

Baron of Petropolis: Grand Officer of the Court

Baron of Santa Isabel: Director of the Faculty of Medicine and Pharmacy Schools in Rio de Janeiro

Baron of Sertorio: President of the Court of Appeal of Rio de Janeiro

Baron of Vila Nova da Rainha: Francisco Rufino Lobato, valet to King Dom Joao VI and brother of the Count of Parati and of the Viscount of Mage

Baron Wanderley of Cotegipe: Joao Mauricio, President of the Council