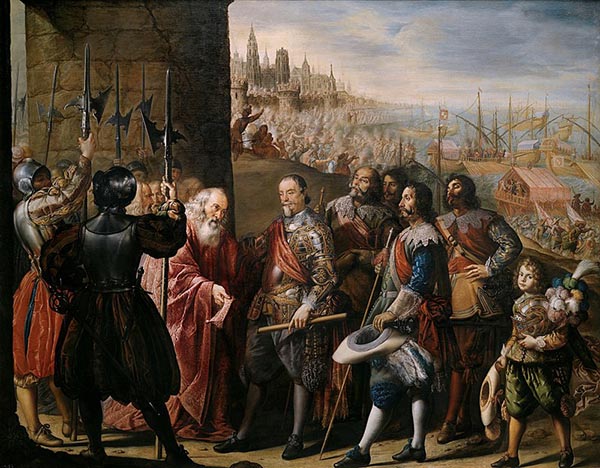 The nobility of Genoa was one of the most cosmopolitan of Italy. In the centuries when the history of Genoa took the ultimate turn of lawful, governmental and financial sovereignty, finally becoming an independent nation, the city grew in importance. The Genoese society has hosted from time immemorial people coming from the most distant and different countries, so much so that among the numerous theories that have been expressed on the origin of the name Genoa, one in particular claims how the origin is to be found in the Greek language, from "Xenos", "Xenoa" meaning foreigner, up to that momentous 958, year of the original foundation and bylaws of the city given by Berengarius II, Marquis of Ivrea and King of Italy, and from then until the end of the Genoese Republic in 1815.

The birth of a ruling class of nobles, merchants and politicians, was therefore also heavily influenced by the emigration in Genoa: it is not surprising therefore to find among the noble Genoese families names that can sound unusual and of foreign origins.

Surnames of the Nobility of Genoa

There were noble Genoese surnames of German origin, such as Fieschi, or of Greek ancestry, such as Cybo or Lomellini, Tatar surnames that morphed into Italian sounding ones such as Imperiale, and Albanese, such as Durazzo, in reference to the Albanian town of the same name. These names suggest a remote place of origin and so it happens for those of many other families that in the centuries were subsequently ascribed to the Genoese nobility.

Some noble surnames originated according to geographical parts of the city. There are certainly references to these areas of the city such as Soxilia, De Porta or Della Porta, De Castro or Di Castello, and Staglieno, which was in the past a densely inhabited city district . The maritime activity carried out as merchants on the sea created noble surnames linked to nautical activities such as "De Mari". Also, other names of the nobility of Genoa had relationship with trade, as "Pevere", which means pepper, or "Safrano", in relation to saffron.

Certain situations are also symptomatic of how in the social order of Genoa at the time there were no closed caste and anyone could aspire and come to be part of the city patriciate, clear examples are the Durazzo, whose progenitor was even a slave.

Legal Merger of Surnames in the Nobility of Genoa:

It was not rare, in medieval and renaissance Genoa, to bring together several families under the surname of the most important one for business reasons or because of dynastic and mutual help. This form of merger was called "Albergo", which means asylum, in the sense of a sanctuary for diverse members of the Genoese nobility.

Then there is a substantial distinction to be made between noble families with origin in titled dynasties with Viscount rank, such as the Grillo, or the powerful Spinola, of feudal origin such as the Carmandino or the counts of Ventimiglia or the Staglieno and the families of popular extraction as the bitter enemies Fregoso and Adorno.

Genoa, moreover, was a republic that ruled many regions controlled by Genoese citizens, such as the Doria in Oneglia or the Fieschi in Lavagna, or the Spinola .Other families instead, were owed large sums of money from foreign Kings, and in exchange were granted titles of Nobility throughout Italy and Europe. This happened with the Lercari family in Sicily, where they founded the city of Lercara. The noble dynasty of Doria acquired the titles of Duke of Tursi and Prince of Melfi, title of nobility owned by Andrea Doria who is responsible for the name of his palace in Genoa, of the Albanian Zaccarias in Greece (the Greek- Aegean island of Chios) or even the Embriaci family in Byblos, Lebanon, where the Nobility of Genoa had colonies.

Those who have had at least one Major Consul of the Genoese Republic, or a Noble or Rector in the periods when power was entrusted to a "Podesta"(Political and military leader) are considered families of Consular Dignity.

The list of the Consular Families of the Genoese Nobility is taken from the Official Rolls of 1861, following the rule that Consul refers exclusively to those called "General Consuls" of the Republic, or Nobles or Rectors in the periods when the power was entrusted to a Podesta administrator, a magistrate very much alike the figure of the Dictator in ancient Rome. In the middle Ages surnames were not often used, and most of the time were even unnecessary, being habitually confused with their corresponding places of birth. The particles "of" and "from", broadly used after the baptismal name, were a source of additional ambiguity. In this official list of 1861, the surnames of the nobility of Genoa are indicated as they were recorded in the registry of the Kingdom of Italy.

Registered Families of the Nobility of Genoa

With Andrea Doria, through the Constitutional Reformation and the laws of 1528, 1548 and 1575, a noble and aristocratic republic was instated, which would last until 1797, when Genoa was invaded by the French armies Of Napoleon and transformed into the brief Ligurian Republic. With the constitutional alteration of 1528, membership in a noble clan became compulsory, effectively transforming the clans into lists of inscription into the government recognized official nobility of the city of Genoa. The reorganisation established that the wealthiest citizens who owned six or more houses would originate a noble clan. On that occasion, it was decided to constitute a unified Order of the Nobility as a differentiated social class, called "Old-Ancient Nobility", divided 24 old noble clans and five new ones were created for the occasion. These noble clans had the finality and aim to prevent the rebirth of old hostilities and protect the wealth and power of the more affluent families of the Genoese Nobility.

The Golden Book of the Genoese Nobility:

In the Golden Book of the Genoese nobility every year between 7 and 10 men of plebeian extraction could be inserted into the minor nobility of the Republic, on condition that they had a rock-solid economic background, thus defining a flexible nobility called "Nobility by Census", in which wealth had a very important meaning.

The most important families of the Genoese Nobility

It should be noted that the nobility of Genoa has been able to express, thanks to some of their most illustrious sons, a very elite part of the European noble class. In fact, for centuries, distinguished families of the aristocracy of Genoa have had a particular relevance in history and in European and Genoese politics and have been objects of study and research.