A French Viscount, a Vicomte, is an elite title introduced to France by Charlemagne in the early Middle Ages and popularised by the second King of France of the Capetian Dynasty, Robert II the Pious.

Like many ranks from the aristocratic hierarchy of Ancient France, this Noble Title originates from the Early Roman Empire. The name stems from the Latin word for deputy and as well as being a title held by Roman Imperial officers, the traditional role of a Viscount was that of auxiliary or companion to a Duke or Count.

A Viscount would often be responsible for the civil and military government of an important border territory within the Empire, and as such, these Noble Titles were often held by significant figures in French history and are highly sought after.

We are the only company in the world able to research Viscount titles in France. Sometimes, we are even able to find Viscount titles from several different regions of France, such as Normandy, Brittany, etc.

History books are full of examples of distinguished French Viscounts with very diverse upbringings and circumstances: intellectuals such as François-René, Vicomte de Chateaubriand, a French writer, politician, diplomat and historian who founded Romanticism in French literature, soldiers such as François Joseph de Gratet, Vicomte du Bouchage, an artillery general, politician, and French Minister of Marine and Foreign Affairs, or ancestors of Eleanor of Aquitaine, Queen of England, such as Vicomte Aimery I de Châtellerault.

As well as their historical importance, these Viscount titles also have the appeal of truly representing the richness and splendour of the French Nobility. The lifestyles of the original French Viscounts were synonymous with luxury and lavish living. Theirs was a rich life of hunting, horse-racing and making wine from the fruits of the vast vineyards of their elegant chateaus.

Our resources provide us with access to genuine, hereditary French Viscount titles from some of the most interesting periods in France’s history. These titles are the perfect acquisition for sophisticated individuals looking to connect with French Nobility.

A French Viscount (Vicomte), plus a Feudal Lordship

Now we can offer a very rare opportunity to our customers.

Our researchers have found preliminary evidence of an extremely rare French noble and Feudal Title with the prestigious rank of Viscount that could be transferred, together with an ancient Feudal Lordship. This title is several centuries old and has an extremely beautiful coat of arms. 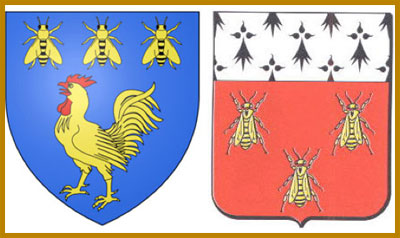 The title will be transferred through solicitors; Very good historical Value. These rare relics of Feudalism are ever scarcer to find. Not many left like this one.

This particular Viscountcy, a magnificent example of French feudalism, is offered at the discounted and reduced rate of 5900€ payable via PayPal or Bank Wire.